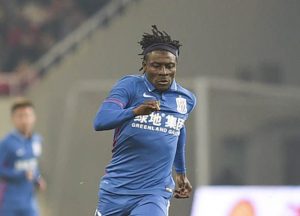 The 33-year-old, who plays in China for Shanghai Shenhua, has scored 16 goals in 39 appearances. His goal on Sunday led his team to the Chinese FA Cup title.

Martins has only played for the Super Eagles four times since 2010, with his last two appearances coming in 2015, despite impressive showings with Seattle Sounders in the MLS and now Shanghai Shenhua.

However, Rohr says he is willing to chat to the Martins to increase his options up-front.

“Yes, the door is open to all our best players, including Martins. He is scoring a lot of goals and we need to get competition for all the positions, especially centre-forward.

“For now, we have Kelechi (Iheanacho) who is playing not all the time. (But) we played with Kelechi against Argentina and he did well.

“Then Anthony Nwakaeme also did well against Algeria and Odion Ighalo, who is injured now, did very well against Cameroon. But we have also other players, like the young boy Victor Osimhen, and we have to look everywhere.

“We have a lot of opportunities for the strikers, and so Martins, if he is scoring goals, will be welcome.”