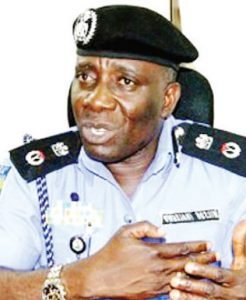 The Ekiti State Governor, Ayodele Fayose, has accused the state Commissioner of Police, Abdullahi Chafe, of rallying behind a customs officer, who allegedly killed two persons and injured others in Ayetoro Ekiti.

It was learnt that the yet-to-be-identified customs officer rammed his car into a shop in Ayetoro Ekiti, leading to the death of the two persons.

Residents alleged they found emptied bottles of alcoholic drinks in the car.

They also alleged that the police after rescuing the man and another female occupant of the car from the scene of the accident, released them without charging them to court, thereby making the aggrieved residents to storm the police station to demand the re-arrest and prosecution of the suspected killer driver.

They claimed that the police reacted by swooping on the town and arresting family members of the victims, among others. They later charged them to court for the breach of public peace.

Some family members on Wednesday took their protest to the Government House in Ado Ekiti.

A spokesperson for the two families, Mr. Adeola Abiodun, said the police seized the remains of the victims and forced the families to sign an undertaking that they would not take legal action before the bodies were released for burial.

“We were made to write the letter under duress and we had no choice because we were constantly harassed by the police,” he alleged.

Mr. Owaremi Adeola, whose son, Emmanuel, died in the accident, said he was also arrested and detained for days for demanding justice.

Fayose, who addressed journalists after the protest, said he was saddened by the weighty allegations against the police.

He said, “I am saddened by this development. Those who are supposed to be protecting us shouldn’t be oppressing us. When people face this kind of trauma, this kind of sad experience, the killing of their breadwinner, husbands, and for any reason, a right-thinking person should not cover it up. We must stand up against this. These people must get justice.

“A man killed two of their family members; rather than charging the suspect who occupied the car to court, the police charged the family members of the deceased to court. I want to assure Ekiti people that we will get to the root of this matter.

“For anyone trying to cover this up, that would only be for a very short time. You can see the young lady, who was also hit by the car. She was pregnant and the foetus has to be evacuated to save her life. For the police to release the suspect who owns the car is unacceptable.”

He added, “I have summoned the Commissioner of Police but I am not satisfied with what he said. There is cover-up everywhere. It is becoming a recurrent decimal.

“How can they ask those who lost their son and relative to write an affidavit indicating that they are not pursuing the case any longer. This was done to cover up the crime.

“It is also funny that the police commissioner has withdrawn his men from the town. How can? You say because the people reacted to what you did, you now withdraw all your men and render the town insecure.”

But reacting to the allegations, the CP claimed his men raced to the accident scene to rescue the suspect from jungle justice.

He said, “The car that hit the deceased could just be an accident and we had to rescue the man from being lynched by the angry mob.”

The CP also confirmed withdrawing his men from the town.