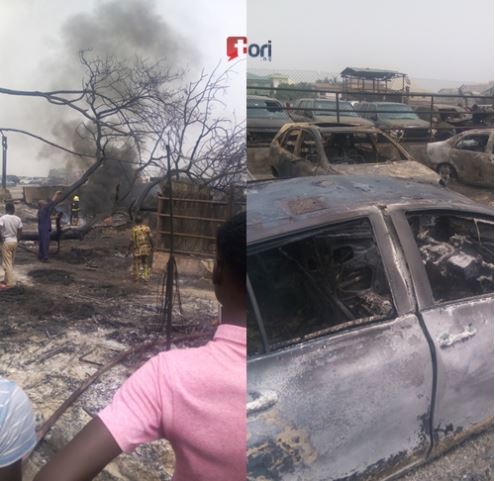 Fire yesterday consumed at least 23 vehicles – three buses, 16 cars and four jeeps – at Festac-Amuwo link bridge when a tanker carrying Automotive Gas Oil (AGO) otherwise called diesel fell and burst into flame.
The truck crashed about 11a.m. while ascending the bridge. About 20 vehicles were burnt at a nearby car mart selling imported used vehicles otherwise called Tokunbo cars.
A furniture and another box shop were left in ruins with the business owners lamenting around the scene of the inferno. When New Telegraph got to the scene, the area was in ruins. The furniture shop next to the bridge was consumed by fire likewise the expensive box shop. A commercial motorcycle, popularly called Okada, was burnt too.
The owner of the car mart, where a number of Tokunbo cars and jeeps were destroyed, Mr. Chinedu Nwogbo, who was taking stock of his burnt vehicles with his lawyer at the time of the visit, said the owner of the tanker was yet to be identified.
Speaking on the value of the vehicles damaged, he said: “We have not known the cost of the damage but by tomorrow, we should be able to come up with the cost of the vehicles. We don’t want to do it in a rush.
“We don’t know the owner of the vehicle yet but it belongs to one of the fuel stations after the bridge. “We are not bothered because the owner of the tanker will pay. We also didn’t see the number plate with which to find out who owns it.”
The owner of the box shop, identified as Jeoff, was too shock to say anything meaningful. He was only saying: “I’m finished in this season. Where will I start from? I’m finished.” The Okada owner, Asuquo Okon, said: “I don’t know what to do now. I needed to save my life first. Nobody has spoken to me and I don’t know who will pay for my motorcycle.”
The Festac Divisional Police Officer, SP Obong Okoh, who was on the ground to ensure that miscreants did not seize the opportunity to cart away people’s valuables, said the owner of the tanker had not been identified as the truck burnt beyond recognition. He, however, said investigation was ongoing to identify the owner of the vehicle.