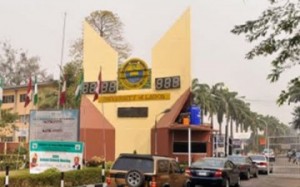 According to reports, the new intakes arrived at the university as early as 8am, complained that they were not attended to.

The university authorities had earlier instructed all successful Unified Tertiary Matriculation Examination candidates, who had been contacted by the Joint Admission and Matriculation Board and printed their admission letters, to report at the Multipurpose Hall A for screening.

One of the candidates, who gave his name as Kenny Olu, said, “When I came, only a few people were here. We had formed a queue, hoping that other candidates would soon come. Later, we heard that some workers were on strike and they shut down the gate of the university. Those of us inside now find it difficult to go out.

“After a while, they opened the gate and we thought they would come and attend to us but nobody came.”

The protesting workers shut down the gate of the university, thereby causing a traffic hold-up on the main road leading to the university gate and paralysing other activities in the university.

The workers said they were protesting the disparity that arose from the N23bn earned allowance recently released by the Federal Government.

They complained that the FG was treating them as “unimportant elements” in the nation’s education sector.

The workers, who were armed with placards, vowed not to return to work until they were attended to.

When contacted, the Chairman of the Non-academic Staff Union of UNILAG, Kehinde Ajibade, said, “The FG is not sensitive enough to tackle our problems. How can government give only two per cent of N23bn to non-academic staff? UNILAG’s case is the worst. We were all given N23 million as earned allowance. We have been robbed and we totally reject that.

“We are not resuming work until our money is released. We know what the FG is trying to do, but it cannot work out. They want us to clash with the Academic Staff Union of Universities and cause a crisis within the university system. But we don’t have any issues with ASUU. It is the FG that we have issues with.”