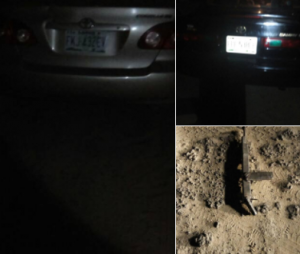 The RRS patrol team of the Lagos State Police Command halted an attempt by a 4 – man robbery gang to snatch a Toyota Camry and a Corolla from two drivers near Lagos Dump Site on Lekki – Epe Expressway on New year’s day.

The robbers, posing as policemen with wooden guns, held the occupants of the vehicles hostage before sighting RRS patrol teams. The robbers fled into the bush, abandoning their victims and one of their improvised guns.

The robbers were chased into a thick forest but no arrest was made. The victims disclosed that two of the robbers posed as policemen before another two who were lurking in the bush came out asking them to surrender their keys.