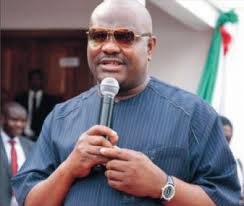 Governor of Rivers State, Nyesom Wike, has emerged as the Silverbird Man of the Year, 2017. Governor Wike emerged winner from a keenly contested vote by members of the public.

The winner of the prestigious Silverbird Man of the Year Award was nominated for embarking on a massive ‘infrastructure’ development in Rivers state, earning him the title , “Mister Projects”.

The official presentation and award ceremony will take place on February 23rd, 2018, at the prestigious Eko Hotel and Suites, Victoria Island, Lagos.

Other distinguished Individuals would also be conferred with various awards at the event. They include:

The Silverbird Extra Ordinary Business Award which will be given to Deji Ali, Leo Stan Ekeh, Doctor Ola Orekunrin and Alhaji Samad Rabiu.

The CBN Governor, Godwin Emefiele and the Governor of Kebbi state, Abubakar Bagudu will receive the Silverbird Special Achievement Award.

While the Silverbird Education Award will be given to the Governor of Bayelsa State, Seraike Dickson.

Another Governor, Ayodele Fayose will receive the Silverbird Man of the People Award.

The Silverbird Legislative Award will go to Senator Ike Ekweremadu and Femi Gbajabiamila.