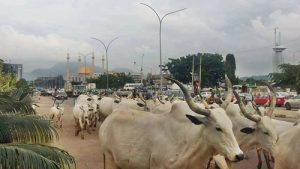 The Ekiti State Government  is currently investigating the reported killing of a herdsman, known as Babuga Dengi, on Monday in Oke Ako in Ikole Local Government Area of the state.

Amid concerns about a reprisal attack, the Ekiti State governor, Ayodele Fayose, summoned a late night meeting on Tuesday to forestall a degeneration of the situation.

According to Mr. Fayose, the herdsman was allegedly killed by members of the Tiv community farming in the area.

He however told a meeting of the Fulani and the Benue communities on Wednesday in Ado-Ekiti that no bloodshed should be entertained as the killer of the herdsman would be fished out and punished.

The murder of Mr. Dengi on Monday followed the mass burial of 73 persons in Benue State on Thursday, who were killed by suspected Fulani herdsmen on a revenge mission.

Mr. Fayose had recently raised the alarm of an impending invasion of his state by Fulani herdsmen, and urged local hunters to rise up to protect the people.

He has also been outspoken in condemning the killings in Benue State by the herdsmen.

“There is no room for the killing of Fulani herders or farmers or anybody in the state,” Mr. Fayose warned.

He said the warning was imperative to prevent violence between farmers and herders and not to give anybody license to unlawfully take human life.

Speaking at the meeting attended by the Miyetti Allah Cattle Breeders Association of Nigeria, farmers, local hunters, security agencies and representatives of the Tiv community, Mr. Fayose assured that he was committed to sustaining peace in the state.

He also warned Fulani herdsmen and Tiv farmers against turning Ekiti to a war zone, just as he urged security agents to quickly fish out the killers of the herder.

“I can’t accept anybody to be killed. If anybody killed anyone I will make sure you are killed by ensuring justice,” said Mr. Fayose.

“I’m sad about the killing in Benue but we don’t want brutality in Ekiti.

“I won’t accept any killing here, the only thing acceptable here is peace. I therefore plead with everybody to cooperate with us.

“I want peace in my state and everybody living here is from Ekiti whether you are Fulani, Tiv, Yoruba or anybody. Cow matter can’t cause problem between us. Oke Ako-Irele issue should not be allowed to fester. Cooperate with us and whoever kills would be fished out.

“When you are entering Ekiti, drop wherever you are coming from at the boundary. You can’t kill Yoruba, Fulani, Igbo or Tiv here. From information so far, the deceased died as a result of clash between Fulani herders and some Tiv people, but at that we can’t condone lawlessness. We don’t want that type of Benue issue here.”

A communique proceeding from the meeting however, noted that the problem in Oke Ako was between Tivs and Fulani, and resolved that the people must live in peace.

It urged security agencies to fish out the killers of the herdsman in the area.

The meeting agreed that the committee on herdsmen should be expanded to include Fulani herders while urging the committee to be more proactive and report immediately to security committee when they see strangers in their communities.

“We ask security agencies to do more in intelligence gathering, information and prevention, while we thank them for what they have done so far,” the communique added.