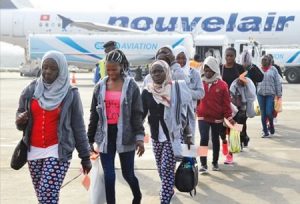 The National Agency for the Prohibition of Trafficking in Persons (NAPTIP), says that the agency has evacuated more than 13, 000 Nigerian illegal migrants to Libya between November, 2017 and January 2018.

Nduka Nwanwenne, Zonal Commander for Edo and Delta States, disclosed this on Wednesday in Ubiaja, Esan South East Local Government in Edo State, during an advocacy and sensitisation visit to schools in the area.

The News Agency of Nigeria (NAN), reports that the sensitisation was in collaboration with the Global Initiative Against Illegal Migration (GIAIM), a Non-Governmental Organisation.

Mr. Nwanwenne said that the federal government had documented another 5, 035 persons to be brought back from Libya in no distant time.

He said that so far the agency had in its custody about 100 victims trafficked for prostitution from both states with one confirmed to be HIV positive.

Mr. Nwanwenne lamented the alarming rate of human trafficking and illegal migration over the years in spite of the ills associated with the trend, hence the need to take the campaign against the trend to schools.

According to him, the pains of human trafficking and illegal migration far outweighs the benefit of those trafficked.

He said that major reasons people gave for illegal migration was unemployment and poverty, but regretted that most victims did not live to enjoy the wealth they made.

The zonal commander also said that human trafficking went beyond sexual exploitation, as human organs were now being harvested from unsuspecting victims.

He admonished the students to shun the quest for quick money and the urge to travel abroad.

Mr. Nwanwenne, therefore, called on parents to stop mounting pressure on their children to travel overseas and make money for them.

Emmanuel Obinyan, the Executive Director of GIAIM, in his remarks said human trafficking had eaten deep into the society because of the crave for quick and easy wealth.

He advised them to be dedicated to their studies as the best and easiest way to good life was through education.

Mr. Obinyan urged the students not to be deceived by anybody that it was easy to make quick money in Europe.

NAN reports that 12 schools participated in the sensitisation exercise which took place at the St. John Bosco Secondary School, Ubiaja.