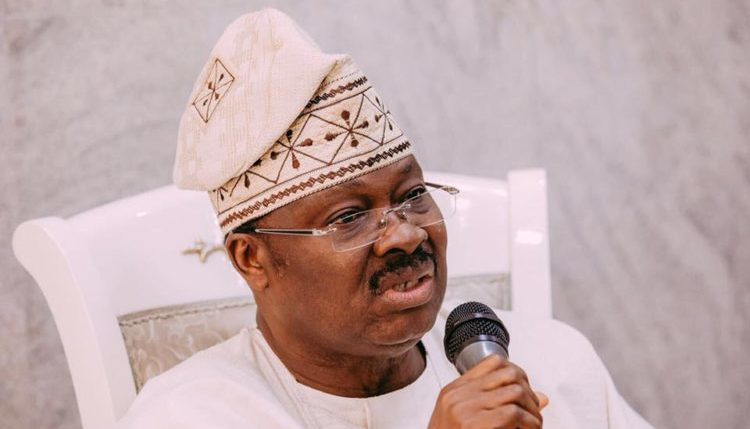 Federation of Oyo State Students Union, FOSSU, has alleged that the Oyo State Government under the authority of Governor Abiola Ajimobi defrauded not less than 20,000 students from the state in disguise of bursary.

The students made this accusation on Monday when protesting against hike in school fees, unpaid bursary and tenacious strike by lecturers in tertiary institutions owned by the state.

FOSSU’s National President, Azeez Sharafudeen, spoke to newsmen at the state capital in Ibadan, where the protest occurred. He gave the government 21 days ultimatum to attend to their needs during the protest that started at Total Garden and ended at the state Secretariat, Agodi Ibadan.

Sharafudeen also said that the state government was not ready to pay the bursary yet it “dubiously asked our students to purchase the form online with N1,200 per head thereby generating millions of naira”.

Press release from the National Secretariat of the Federation of Oyo State Students’ Union [FOSSU], on Monday, 29th of October, 2018 over the underfunding of educational sector and perpetual strike actions in all state-owned tertiary institutions and the non-payment of indigenous students bursary/grant.

Thousands of indigenous students across the country gathered today to protest against bad educational policy in the state , unjust skyrocketing of tuitions fee, incessant strike action in all state-owned institutions, over-crowding of students in lecture rooms, imposing of illegal levies on students in the name of generating IGR for state-owned schools, semi-privatization of state-owned institutions, lack of teaching materials & aids in schools, lack of infrastructures in school and failure to fulfill the signed MOU over the payment of students bursary and other issues on education in the state.

Today, thousands of indigenous students in the state have resolved to come out in a well-applauded democratic measure to inform the general public, the plight bedevilling the state of education and students’ well-being in the state. Today’s commitment has taken a page in the history of the state, yes!

The planned mass demonstration is dedicated to every mind, who continued to feel unjust, discomfort and not pleased with the provocative circumstances ceaselessly visiting the educational sectors of the state, where the human resources and the material values hosting the academic terrain scathe continued to suffer setbacks, as the degradation keeps resurfacing in the system. Entire students of the state under the leadership of Comrade Azeez Akano stating categorically right from inception into office as National President has been proving to be resolute, radical and coordinated wing of students movement. This has provided us with enormous opportunity to maintain our cordial affairs with the APC – led government of the state, regardless of unwelcoming treatment we continue to receive at our ends.

It’s considered imperative to inform the members of public society and the international community as the derelict state of education calls for public concerns. The government of the state under the leadership of Governor Abiola Ajimobi in recent time, as part of its ability to enliven the inclusion of students’ responsibilities in government, by charting a template to ensure students enjoy the bursary scheme and scholarship grants, but we can say, this was only done to defraud unsuspecting numbers of students who applied through online – registration with sum of one thousand two hundred naira [N1,200] as processes involved were found to be fraudulent and it was an act to extort students.

Even from the record, 2012 was the last year, students’ bursary/grants were included in the budget of the state, though was done with series of manipulations and irregularities, where bonafide and genuine students of the state who duly registered as a member of FOSSU were unable to appear in the beneficiary list.

Recently, the umbrella body of all indigenous students of Oyo State, FOSSU, has rightly raised alarm on the double-standard play out of the state government over its unproductive response which translates into its apparent jettison to implement the signed MOU; the agreement in question was unequivocally made by the government and students body during the roundtable peace-broker meeting held on May 21st, 2018 in a bid to avert the planned protest of May 24th, 2018, having exhausted all means and mechanism in articulating for the right of entire students.

The joint Memorandum released, stated that 21 days ultimatum was agreed – on, in order to provide effective modality at which the said payment will be done and the two bodies shall reconvene for subsequent activities stipulated toward successful actualization of this year bursary scheme.

We’re addressing the public today, as part of the day activities for the massive occupation of the state, as other activities will soon be unleashed, students of the state have resolved to kick start the mass demonstration until justice is provided and needful is done to the yearnings of the students. We’re as well stating categorically that, no hanky-panky play on the part of the government shall be entertained and no excuses of financial shortfall shall be condoned.

What can we say, when other states in the region are doing well to put smile on the faces of students. Lagos, Ogun, Ekiti and others are on yearly basis ensuring the implementation of students bursary in the state budget, in order to strengthen the fact at hand; Kwara State has recently released the sum of 100M for the payment of students’ bursary.

FOSSU actions and reasons for going into the protest.

The leadership of Federation of Oyo State Students Union [FOSSU] National Council has over the year wrote series of letters to the State Government over the closure of LAUTECH and other state-owned institutions with no reasonable actions from the Government.
FOSSU NATIONAL S.O.S letters to the Federal Government appealing to intervene on the crises bedevilling LAUTECH and it underfunding.

FOSSU NATIONAL has from time to time made consultations to ASUU LAUTECH chapter and staff unions of all the state-owned institutions in proffering solutions to the underfunding of the institutions in the state.

FOSSU NATIONAL has sent S.O.S letters to the Government on several factors militating against proper functioning of all institutions in the state.

FOSSU NATIONAL met with the Commissioner of Education on Friday 19th May, 2017 where all issues affecting Oyo State institutions were discussed and resolutions of the meeting expected to be implemented but Alas! Just few of the resolutions were implemented.

The general public will recall that the state government in its guise for payment of student’s bursary in 2014 mandated all Oyo state students to purchase an online bursary form of 1,200 per applicants.

Over 20,000 Oyo state indigenous students purchased the form amounted to millions of naira.

The government since 2014 refused to pay the said bursary and never returned student money collected.

Series of consultations with the Oyo State Scholarship Board and Ministry of Education on why the government did not conclude the bursary payment proof abortive as no tangible excuses were given.

After failed attempt to persuade the government to pay the said bursary, Oyo state students choose to go on protest on may 24th 2018 which led the government on 21st may 2018 to engage the student’s leader in a roundtable meeting to avert the proposed protest, meanwhile before the student leaders agreed to cancelled the may 24th 2018 protest, the government representatives consisting of SSG, Commissioner for Education, Commissioner for Youth, S.A. Students, S.A. Youth, Permanent Secretary Ministry of Education, Chairman Oyo state scholarship board and its Secretary and others government officials and student leaders across the 5-geopolitical zones in the state i.e. Ibadan, Ibarapa, Ogbomoso, Oke-Ogun and Oyo with representatives of all institutions outside Oyo state under the leadership of Federation of Oyo state students union signed an M.O.U on better ways to run all the state-owned institution in the state, increases subventions to all the institutions and immediate and continuous funding of LAUTECH and modalities to pay the students bursary demand and that all process would be concluded within 21 DAYS after the meeting.

Since May 21st roundtable meeting with the government representatives where 21 DAYS ultimatum was agreed upon the government has been playing the whole students by series of actions and inactions.

The students again resolved to engage in another protest on September 4, 2018 after the government failed to implement the signed M.O.U of may 21st but the government through the Chief of Staff to the Governor and other government officials called students leaders into another meeting and this time around request the leaders to submit the details of all Oyo state students qualified for the bursary and appealed to stop the plan protest for the government to work on the students data who shall be beneficiary of the said bursary.

The student under the umbrella body of Federations Oyo state Student Union [FOSSU] National Council called for a progressive meeting between students in the state on Thursday 4th October 2018 where all students angrily decided to go a strong planned protest and press-conference to intimate the general public and the world at large the Oyo state government negligence and lack of funding to all the state-owned institutions and incessant hike in school tuitions fees and the government failure to implement all the M.O.U the student signed with government on better ways for funding the education sector in the state.

The students realize the government deliberately decided to dupe the student by asking to purchased bursary form it never ready to pay and hereby choose to go on a massive protest and hold a press conference on Monday 29th October 2019.

Immediate reversal in the hike of LAUTECH tuition fees, immediate reopening of all state-owned institutions on strike. Proper funding of all institutions in the state. Reversal of government intentions to sell or privatizes LAUTECH. Provision of adequate teaching materials and Research facilities to all institutions in the state. Total stoppage of fraudulent levies on students in all Oyo State institutions aimed to boost IGR for the Government. Provision of infrastructural developments and buildings of more Lecture theatres in all institutions to prevent overcrowding of students during lectures. The government of Governor Abiola Ajimobi has not laid a single foundation block in any institution in the state and diverts all TETFUND allocation to institutions in Oyo State from Federal Government to Technical University should stop with immediate effect. Refund students #1,200 money used to purchase the bursary online form since 2014 with accumulated interest also from 2014 till date. Public declaration of identities of the consultant the government engaged and connived with to duped the whole students in the state through online bursary sales.

It’s on this point; we want to submit by saying, he who makes peaceful resolution impossible, makes violent confrontation inevitable.