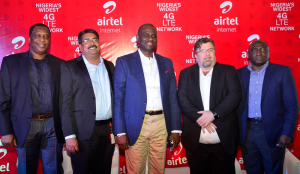 The Chief Executive Officer and Managing Director of Airtel Nigeria, Mr. Segun Ogunsanya, has said the telco now has the widest 4G network coverage in the country.

Ogunsanya who was speaking recently (24/10/18) at the Wheatbaker Hotel, Ikoyi, Lagos during the formal unveiling of Airtel 4G, said Airtel has launched its 4G network in over 60 major cities and towns in Nigeria across many states.

“Airtel’s 4G network is now in over 60 major cities and towns in Nigeria across different States, making Airtel the network with the widest and largest 4G coverage in the country,” he said.

The Airtel CEO also noted that the Airtel 4G launch in Lagos “serves as a glowing testimony of our commitment to partner and empower the good people of Lagos, a truly cosmopolitan state where dreams come true.

“We know Lagos has its own spirit – a can-do spirit and it also has its own peculiar energy, which is very fast-paced.

“The good news is that Airtel 4G will help everyone in Lagos to do more and achieve more, regardless of status and location.

“With fast mobile Internet, a young professional will be able to use his map to understand the traffic network, plan and connect with the right people. The tailor will be able to take measurement through video calls; the fish seller will be able to share photos and short videos of his current stock. Ditto every other person.

“Indeed, 4G comes with tons of benefits and the possibilities are endless: it will accelerate economic and commercial activities; it will boost personal and professional productivity; it will help in creating more entrepreneurs; it will offer the youth a big leverage to express their creativity and talent; it will improve the overall quality of life and connect more people to their dreams,” he said.

On the 13th of February, 2018, the telco recorded a major milestone with the pioneer roll-out of its 4G network in Ibadan to the delight of many Nigerians who live in the ancient city.

Since the pioneer launch, Airtel had not looked back. On Thursday, 4th May, 2018, it unveiled its 4G service in Abuja, the nation’s capital while on the 19th and 25th of September, it announced the launch of its 4G service in major towns and cities in Anambra and Delta states.

Airtel CEO, Mr. Ogunsanya and the Executive Governor of Rivers State, His Excellency, Nyesom Wike, on the 27th of September, formally unveiled the Airtel 4G service in Port Harcourt.