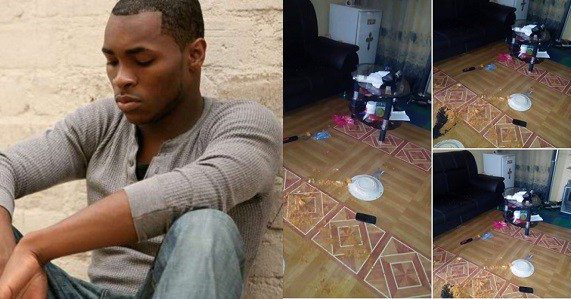 A Nigerian man has been left in a state of dilemma and is soliciting advice from the public after his girlfriend and his good friend clashed over food in his apartment.

According to his narrative, his girlfriend has now involved her father who is a Divisional Police Officer in the matter and wants his friend to be arrested over the incident.

He shared his story as thus,

My girlfriend visited few days ago and she planned on staying for the rest of the week. Unfortunately last night a very good friend(male) of mine visited and spent the night with us. This morning I woke up very early and left for work. I dropped money for food so she and my guy who said he will be leaving later in the day can eat.

And few mins ago my girlfriend called me crying, telling me that my friend is beating her up. I have to suspend whatever I’m doing and rushed home. On getting home the whole place was scattered both kitchen, Sitting room and bedroom. When I asked what the problem was my girlfriend told me in an emotional voice that she just finished cooking and went to the bathroom only to come out to see that my guy has already dished out food and was eating.

When she tried to question him on why he couldn’t wait for her to come out and give him food . He rebuked her and they started exchanging words which later led to a fight or should I say beating.

To make matters worse my girlfriend has already contacted her father who is a DPO and he called and directed that I should get the guy arrested before he gets here tomorrow morning.

If you where in my shoes, what will you do?