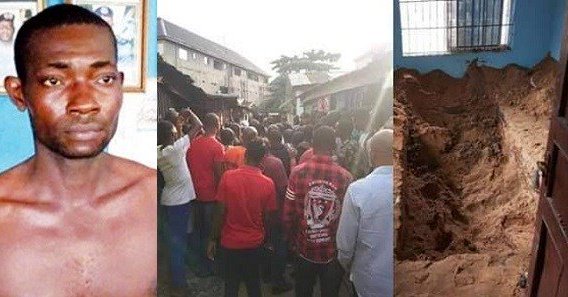 Mr. Wilfred Nwovueze, has insisted that Prince Owabie aka J-BOY, the suspected killer of his pregnant daughter, Betty must marry her corpse.

Nwovueze told newsmen on Thursday that the marriage is in line with a compulsory traditional rites of Ndele people in Emohua Local Government Area of Rivers State where the deceased hailed from.

He, therefore, pleaded with security agencies to ensure that justice is done in the killing of his daughter.

“I don’t want any problem. That girl is my daughter and what I want the Police to do is to allow this J-Boy of a man or his family members to marry my daughter before they bury her.

The suspect, Owabie led the personnel to his room where he buried his girlfriend in a shallow grave.

Spokesman of the Command who was also at the scene said the body of the girl will be deposited in the morgue after which an autopsy will be conducted.

The middle-aged suspect identified as Prince Owabie of Rumueperikom community in Obio-Akpor Local Government Area of Rivers State is believed to have killed the girlfriend identified as Better Nwabueze and buried her inside his one bedroom apartment within Wimpy Junction by Ikweere Road last Sunday.

Owabie, popularly called J-BOY two days after confessed his deed to some of his friends who raised alarm to the police that led to his arrest.