A Nigerian couple in India has been arrested by Samata Nagar police on Tuesday, May 14 for allegedly stealing data and pin numbers of customers at ATM’s in different locations.

The couple according to reports, would insert a skimmer and micro cameras into the machine so as to create clone cards of the data. 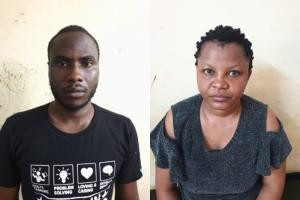 The duo has been identified as Isaiah Ogunleye Seyi, 34, and Rosy Colin Warri, 37. Both reside in Nalasopara in the Palghar district and may be living in Idia illegally as their passports could not be found at their houses upon the arrest.

The couple were busted after the YES bank branch at the Chennai head office received several complaints about their ATM centre situated in Thakur village in Kandivali East.

The bank sent some of its officials down there to check the skimmer machine, where they found a micro camera installed in the ATM.

“They had placed a skimmer and micro-camera at a Yes Bank ATM kiosk in Thakur village. After a customer approached police claiming that he had seen a skimmer attached to the ATM, we started investigations.”

Police set a trap and was waiting for hours outside the ATM centre until they eventually caught the suspect, who had gone back to take the skimmer machine and the micro camera.

Seyi reportedly tried to run away when he saw the police but was chased down.

“We chased him down after he had run over a kilometre” he added.

Seyi later confessed to the police about the involvement of his girlfriend, who was also arrested.
Further investigation showed that Seyi came to Mumbai on a business visa while Colin had visited the city in order to undergo some treatments.

The police said at first the couple refused to cooperate.

“They said they could not speak Hindi or English. We even got an interpreter,” said senior inspector Kasbe.

“We are probing if the couple has been booked for similar crimes in the past. They have been sent to police custody till May 17.” said the official.