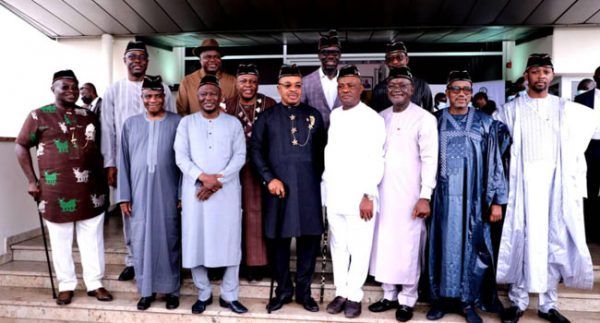 Governors elected on the platform of the Peoples Democratic Party are currently in a closed-door meeting in Uyo, the capital of Akwa Ibom State.

Although the agenda of the meeting is not yet disclosed, it might be connected with the 2023 general elections.

The Chairman of the PDP Governors Forum and Governor of Sokoto State, Aminu Tambuwal had made a pledge to provide the needed platform for the party to return to power at the federal level in 2023.

Tambuwal said this on Sunday at a state banquet, organised by the Akwa lbom State government, ahead of the forum meeting in Uyo.

He promised that the PDP governors would not disappoint Nigerians looking up to them to actualise their yearnings for the party to return to power in 2023.

Those in attendance at the meeting include the host Governor, Udom Emmanuel; Nyesom Ezenwo Wike of Rivers, Douye Diri of Bayelsa, and Samuel Ortom of Benue.

Others are, Governors Ifeanyi Ugwuanyi of Enugu; Ifeanyi Okowa of Delta; Ahmadu Umaru Fintirin of Adamawa; Godwin Obaseki of Edo; Governors Bala Mohammed of Bauchi; Seyi Makinda of Oyo and Zamfara State Governor who is being represented his Deputy, Mahdi Aliyu Gusau.