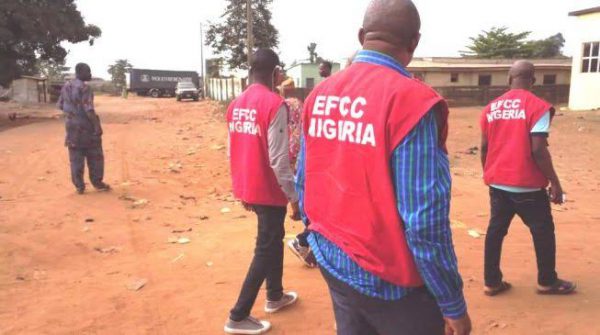 Nigeria’s anti-corruption agency, Economic and Financial Crimes Commission (EFCC) has invited about 25 members of the Association of Senior Civil Servants of Nigeria (ASCSN), for questioning over alleged corruption, according to SaharaReporters.

ASCSN is affiliated with the Trade Union Congress (TUC).

A statement by Comrade Andrew Emelieze, Convener of the Congress of Senior Civil Servants of Nigeria (CSCSN) on Friday, which was obtained by SaharaReporters, said the Kwara State Secretary of the union, Comrade Joseph Meshech and the Deputy Secretary-General of ASCSN, Comrade Apebo Joshua, were also interrogated.

The body said the invitation of the executives and members confirmed its earlier position that there was corruption in various industrial unions.

The statement said, “Information reaching us has confirmed the invitation of close to twenty-five staff members of the Association of Senior Civil Servants of Nigeria (ASCSN), an affiliate of the Trade Union Congress (TUC), by the Economic and Financial Crimes Commission (EFCC); over issues of corruption in the trade union.

“Our source also confirmed the interrogation of the Kwara State secretary of the union, Comrade Joseph Meshech. Among those also invited for interrogation include the Deputy Secretary-General of ASCSN Comrade, Apebo Joshua.


“The invitation of ASCSN officials by the EFCC has justified the agitations of some activists in the labour movement in Nigeria, that massive corruption is going on in our different industrial unions. Groups like the All Workers Convergence (AWC) and the Congress of Senior Civil Servants of Nigeria (CSCSN) have been raising alarm over the rot in the labour movement especially in the Association of Senior Civil Servants of Nigeria (ASCSN) which has assumed a crisis situation.

“Most unfortunately, the response from members of the union has been docile and nonchalant, even the media has not given adequate attention to our query over the privatization of the labour unions in Nigeria except for a few radical journalists that have been following our challenge against the labour bureaucracy in Nigeria.

“Most surprisingly is the fact that we also called on the Minister of Labour and his ministry, the Head of Service of the Federation, the TUC, and even some social activists but there was no positive response from any of the aforementioned. Present events have vindicated our agitations.


“We, therefore, call on the EFCC to do a thorough job and ensure that they do not compromise as we are aware that there are lots of petitions against ASCSN in the EFCC and other anti-graft agencies. Other anti-graft agencies are also called upon to swing into action and investigate the corruption in ASCSN. We are also calling on the mass media to interrogate the allegations of corruption in ASCSN.

“To all members that have been sitting on the fence, it is time we woke up. It is our welfare and our check-off dues that are at stake. Lawal must pay for his crimes against Civil Servants and humanity. We call for Lawal’s investigations. Lawal Must Go.”