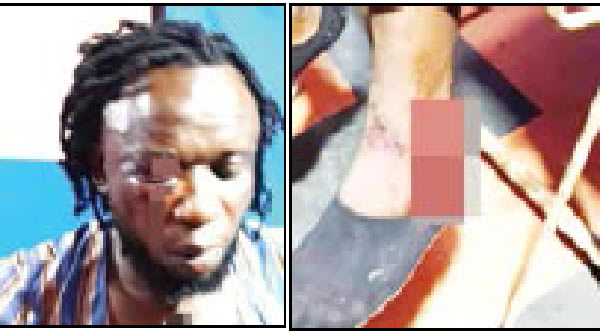 An artiste in Ebonyi State, Kelvin Ibinabo, has been hospitalised after he was allegedly brutalised by an aide to the state Governor, David Umahi for refusing to sing the APC Guber Candidate, Hon. Francis Nwifuru’s campaign song.

The aide, known as Machiavelli Uzo, is the Coordinator of Ohaozara Development Centre in the Ohaozara Local Government Area of Ebonyi State.

The artiste told journalists on Tuesday that the governor’s aide, Uzo alongside his loyalists, attacked him on Saturday and locked him up in a dark room.

Narrating his ordeal, Ibinabo said he was booked by the LGA Chairman, Mr Consider Ajah, to perform at the burial of his mother-in-law in the council.

According to him, when it was nightfall, he ordered his crew to pack up.

“It was at that point that the Ohaozara Development Centre Coordinator, Machiaveli Uzo, emerged from nowhere and ordered me to play the campaign song of the APC governorship candidate in Ebonyi State,” the victim added.

Ibinabo said he declined the request because he was done with his performance and the event he was invited to was not a political event.

He alleged that the coordinator threatened to attack him if he did not comply.

“At that point, I had no choice and for the sake of peace, I picked up the microphone and started playing the song for him.

“After about 20 minutes, I dropped the microphone; but Mr Uzo again ordered me to pick up the microphone and play until he was satisfied.

“But I refused to sing and instead ordered my crew to pack up so we could leave the scene. At this point, the coordinator and his thugs descended on me, beating me with different weapons.

“After beating me to almost a comatose state, they whisked me into a room in the compound and locked me up.

“The police in Ohaozara later arrived, rescued me from the room and took me to the Alex Ekwueme Federal University Teaching Hospital, Abakaliki, for treatment,” he added.

The victim said the Ohaozara council chairman was not around when the incident happened.

Uzo, however, denied attacking the musician, whom he described as a friend.

He said he pleaded with the artiste to sing a song for him, which he agreed to.

“After that, we went inside the house and were making merry but after some time, he (Ibinabo) said he wanted to go outside and check something.

“The next thing I heard was a commotion with some people beating him and chasing him into the house. I was also surprised by the action of his attackers like others inside,” he added.

The Ebonyi State police spokesperson, SP Chris Anyanwu, told Punch he was not aware of the incident.

He, “I am yet to hear and receive details of this. Where did it happen? Who ordered him to sing the APC song?

“I will get across to the DPO of the area for details and give you detailed information. Please, calm down.”