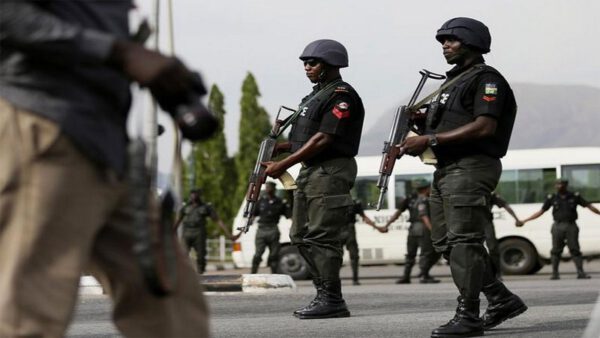 With the 2023 election just a little over one month away, the safety of Lagosian, especially voters in the state during the exercise may land in the hands of criminals after the threat by the State Command of the Nigeria Police Force threatened to go on strike during the polls if their six-month allowance increment arrears were not paid by that time.

Recall that in 2020, President Muhammadu Buhari had promised a 23 percent increment in police allowance, with the implementation scheduled to start in January 2022. However, the implementation didn’t commence until July 2022. The allowance being owed to thousands of policemen across the country, was for the period between January and June 2022 (6 months), and according to the aggrieved policemen, about 75 percent of them are yet to be paid the benefit, and they have complained to the authorities severally.

Some policemen had raised the alarm about the withheld increment arrears over their needs to meet immediate personal financial obligations, as they appealed to the Inspector General of Police, Usman Alkali Baba, and other stakeholders to rescue them and sort the issue.

According to Sahara Reporters, the aggrieved senior police officers had allegedly planned to hold a mega protest in Lagos State on Monday, over their unpaid six months arrears by the police authorities. Police sources shared WhatsApp discussions with the online platform which confirmed the development, adding that only grade level 03,04,05,06 and few 07 were paid while those in grade level 08, 09, 10 and 11 were not paid.

But debunking the rumour on Saturday and slamming the news outfit for reporting fake news, the Nigeria Police Force Public Relations Officer, Olumuyiwa Adejobi in a series of tweets, laughed it off, saying a strike by the police force was impossible.

He said, “Most times, I laugh when I read what some bloggers and news platforms write or publish on policing in Nigeria. This news, at times, look sponsored because they lack professional touches and merit. They are garnished with and full of lies, unfounded issues, assumptions, presumptions, etc.”

“Police Force is not a labour union or group where its personnel meet and deliberate on protest or strike. It’s not possible. We know and are aware of some ‘don’ts’ in the NPF being a regimental organisation. There is a particular news platform whose name sounds like or resembles a desert that will always want to stir up the NPF and our nation with its fake news, unfounded points, unguided arguments, and fallacies. We are disciplined in the police and uphold our ethics and sanctify of traditions and doctrines,” Adejobi added.

Sadly for the police leadership, the rumour didn’t go away as the matter became more serious, with more reports confirming the proposed protest to be true, while sources said that the police leadership had told all heads of commands not to allow protests or they will be removed and punished.

Still, some unnamed police officers on Sunday, laid out their grievances to Daily Post about the withheld payment. One of the officers said, “You must have known of the headline that police will withdraw their service during the election because of the same issue, my brother when we had some sigh of relieve as they started paying some selected group which is about 25 percent of police, they paid junior inspectors downward, commissioner of police upward, some specialists like doctors almost two weeks ago, we were kept on suspense since these days without any sense concern or responsibility.”

Expressing his frustration, another policeman said, “We need the money to take care of our immediate needs, the job is life and death without much motivation to boost the down sloppy morale, please help us”.

According to Punch, a senior police officer (name withheld) said, “Senior inspectors from Lagos police command are planning to protest at the Lagos command Headquarters on Monday over the unpaid six months arrears.

But in an obvious show of worry and to avoid a looming national embarrassment, the next day, which was exactly the proposed day of the protest, and apparently finding out that the planned protest wasn’t fake after all, the police leadership finally realised that what they felt was impossible was now possible.

Hence, the IGP in a circular dated January 16, 2023 sent to all the zonal Commands across the country, explained that those who had not been paid their salary arrears were due to lack of fund as the money released by the Nigerian government was not insufficient, while threatening those planning the strike that their action “will be construed as mutiny”.

The circular read, “It has come to notice of the Inspector General of Police that some policemen in Lagos State Command are allegedly planning a protest over misinformation on non-payment of the arrears of salary from January to June 2022.

“It should be noted that payment of the arrears from January to June 2022 had been made for all Constables up to unconfirmed inspectors, as the fund released by the federal government could not pay all Personnel.

“As a result, Inspector-General of Police in his magnanimity ordered that payment should start from Constables upward. Be assured that payment for Confirmed Inspectors and Officers Cadre will be effected as soon as fund is released by the federal government.

“Inspector General of Police directs that heads of commands and formations make this a subject of lecture to their men accordingly. Protest in any form will be construed as mutiny.”

Following this threat however, the planned protest billed for that Monday, didn’t hold.

With the IGP not giving a specific timeline about when the payments will be made, there’s possibility that this unfortunate development coming up in the lead up to the most defining election ever in the country, it would be a tragedy if the planned strike on election day comes to pass.

The action would mean there would be non-availability of policemen at the police stations, polling units and other important locations. Apart from being a shame, the proposed industrial action would also kill the efforts of the Independent National Electoral Commission to ensure a well participated free and fair election, especially with modern technology set to be used to prosecute the exercise. This is because voters wouldn’t want to go out to perform their franchise for fear of being killed or harmed due to unavailability of security.

With the police nowhere to be found on election day and with the voter apathy this will cause on the day, the menace of vote buying, voter intimidation, electoral violence, amongst others which already is a fabric in the nation’s political design, would be more easier for electoral thugs to prosecute, putting the electoral violence on a record high, as the Economic and Financial Crimes Commission, the Independent Corrupt Practices and Other Related Offences, and other security agencies, will be overwhelmed on the day.

However, if the strike action billed for the election day is later not embarked upon due to the threat of the IGP to treat the industrial action as an “act of mutiny”, what then may happen on election day when unmotivated, frustrated and hungry officers who are also humans that have families to cater for and other responsibilities to perform, are thrown in the streets to protect voters?

Your guess is as good as everyone else. Due to the hunger, or desperation to meet their needs or both, collection of bribes to assist in compromising or manipulating the election, looking away in the midst of electoral violence, vote buying, rigging, and the most worrying could be the unwarranted, unprovoked and indiscriminate shooing and killing of innocent voters, amongst many other illegal and overzealous acts, will be the order of the day, or maybe cause a postponement or cancellation of the election.

The leadership of the police force is advised to pay the entitlements of its personnel in full, so there won’t be any excuse for them to commit any of the above mentioned act, besides, even sane and well fed officers commit those same wrong acts. The police should not unconsciously give room for any form of chaos or mar the election by putting such disgruntle officers on the road.