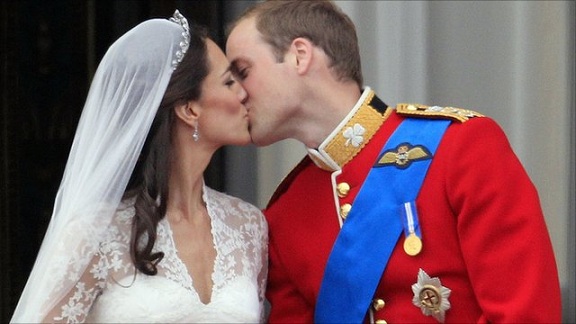 Prince William and Kate Middleton have kissed twice on the balcony of Buckingham Palace after their wedding service in Westminster Abbey.

They were cheered by 500,000 well-wishers who gathered outside the palace, as RAF planes flew past in honour of the new royal couple.

Police estimate a million people lined the procession route from the abbey to the palace.

The bride will now be Her Royal Highness the Duchess of Cambridge.

Prince William drove his new bride back to Clarence House, following a buffet reception at Buckingham Palace, in Prince Charles’s classic blue Aston Martin, decked in ribbons and balloons with “Just Wed” on the number plate.

They will return to the palace for evening celebrations later.

The church service, watched by 1,900 guests, ran smoothly but the prince did struggle to place the wedding ring on the duchess’s finger.

Following a long tradition, the ring has been fashioned from Welsh gold given to Prince William by the Queen.

After the couple said their vows, in which she did not promise to obey William, the Archbishop of Canterbury, the Most Reverend Rowan Williams, declared: “I pronounce that they be man and wife together, in the name of the Father, and of the Son, and of the Holy Ghost. Amen.”
Source: bbc.co.uk