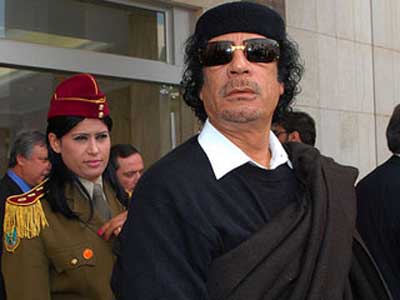 Members and security forces of the regime of the ousted Libyan leader, Muammar Gaddafi, may have crossed over to some parts of Northern Nigeria.

The Spanish-owned Hamada Radio International reported on Friday that the Libyans were fleeing from French Special Forces Foreign Legion and their British counterparts.

The report said that some members of the old Libyan regime were heading towards Burkina Faso.

According to the staion, the Libyans entered Nigeria on Thursday night when their convoy of trucks missed their way and headed towards the North-West town of Katsina.

There was a series of security co-coordinating conferences between Nigeria and Niger on how to check a spill-over of the Libyan crisis into the region, especially with the new wave of trans-border crossing by prominent Gaddafi loyalists, including Gen. Houssa Daw, the head of his presidential guard unit.

The report added that some members of the Libyan military, such as the head of Gaddafi’s security service, Gen. Youssef Dbiri, had maintained close family ties with Northern Nigeria.

Dbiri, the report claimed, had his maternal roots in Nguru, Yobe State in North-East Nigeria.

The report said, “According to security service sources in Niger Republic, the fragile ceasefire between the Touareg rebels and Niamey will be tested in the coming weeks if attempts are made to give outright support to the Special Forces from France, UK, USA and Jordan in the Gaddafi hunt.

‘‘Another fear is the solidarity and sympathy, which the fleeing Gaddafi supporters might get from Southern Niger, in the Maradi-Damagaran area, and the outer fringes of Northern Nigeria where al-Qaeda affiliated Boko Haram is lately seen as potent forces,” the report added.

The station further claimed that its sources had stated that more than 200 Nigerians were arrested in Libya by the Transitional National Council, while about 20 of them were executed last week for allegedly working for Gaddafi as mercenaries.
Source: Punch Newspaper