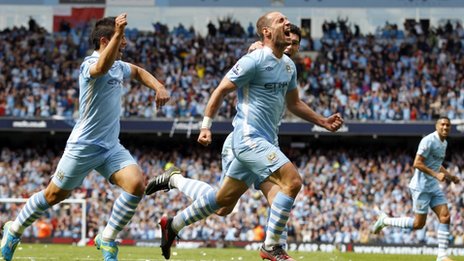 Manchester City won the English title for the first time in 44 years, surging past Queens Park Rangers 3-2 on Sunday with Sergio Aguero scoring his team’s second goal during stoppage time.

City scored two goals in extra-time against Queens Park rangers from Edin Dzeko and Sergio Aguero to snatch the title from under United’s noses – after Sir Alex Ferguson’s side had beaten Sunderland 1-0 thanks to a goal by Wayne Rooney.

At first, City’s hopes of claiming the title looked to slipping away as QPR – already safe from relegation after Stoke City beat Bolton – held on desperately to an unlikely lead and Manchester United led at Sunderland. 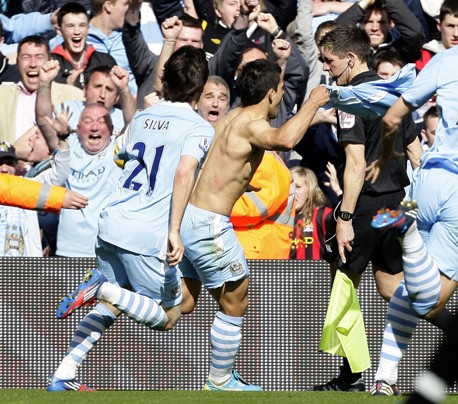 City, needing three points to clinch the prize, led through Pablo Zabaleta at half-time but Djibril Cisse levelled for QPR just after the break.

QPR lost Joey Barton after he was shown a red card following a clash with Carlos Tevez but then stunned the Etihad Stadium into silence as Jamie Mackie headed them in front.

City set up permanent camp in QPR’s half but looked to be condemned to utter misery as QPR keeper Paddy Kenny produce a string of saves to ensure Mark Hughes’ side held firm.

Then, as the clock ticked into five minutes of additional time, City and their supporters were transported from the depths of despondency the highest high in the space of moments.

Substitute Edin Dzeko headed an equaliser two minutes into the extra period and then – in a stadium almost bordering on hysteria – Sergio Aguero drove into the penalty area and flashed a finish past Kenny.

The Etihad Stadium was an explosion of joy and relief as 44 years of frustration poured out, Aguero wheeling his shirt about his head in celebration and manager Roberto Mancini, who had cut an increasingly frantic figure, racing around on the turf in ecstasy.

As Mike Dean’s final whistle blew, the reality dawned on City as they capped a run of form that has seen them overturn United’s eight-point advantage in the space of five weeks.

And for supporters who have suffered watching the successes of neighbours United under Sir Alex Ferguson, this was the perfect moment of redemption.

The atmosphere was a mixture of the tense and triumphal as the teams came out to a torrent of golden ticker tape raining down from the stands.

The breakthrough finally came six minutes before half-time. Yaya Toure had been struggling for some time with a hamstring injury, but he was able to play in Zabaleta and his shot squirmed through the hands of QPR keeper Kenny and in off the far post.

QPR were level shortly after the restart when Cisse took advantage of Joleon Lescott’s poor header to beat Hart – but they were then plunged even further into a rearguard action when Barton was sent off.

He will claim he was provoked by Tevez, but he can have no complaints as he raised his arm to the Argentine and then kicked his fellow countryman Aguero after he received the red card.

QPR lifted the siege in stunning fashion when Mackie stole in at the far post to head them in front and all City’s efforts were thwarted as Kenny saved well from David Silva, Aguero and Dzeko among others.

It looked like the day that had started for City with such anticipation and expectation was going to end in despair – then came the finale and the goals from Dzeko and Aguero that will live forever in the memories of every City fan who witnessed them.