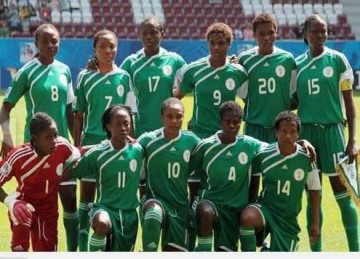 Nigeria’s Under-20 Women National football team, The Falconets, have been drawn up in group B of the forthcoming 2012 FIFA Women’s World Cup hosted by Japan and scheduled to start on the 19th August till the 8th of September.

Nigeria’s Head Coach, Edwin Okon together with other officials from the country witnessed yesterday’s draws staged at Conrad Hotel in Japan, while FIFA Head of women’s competitions, Tatjana Haenini, presided over the event.

“Now we know who our opponents are, great teams with excellent records in the women’s game. So it is an indication that we would need to step up our preparations, technically, professionally and otherwise,” Okon said.

“Thank God we have the full support of the Nigeria Football Federation (NFF) to see us through.” he added

“We have not played anyone in our group previously, but we are very determined and optimistic. We will give our all. I left my thoughts about the draw to fate, knowing that no matter the result it was determined by God,” Ben-Anuge stated.

Tournament host, Japan, will face New Zealand, Mexico, and Switzerland in Group A

Argentina will do battle with Korea DPR, Canada, Norway and Argentina in Group C

In Group D, Ghana will contend with defending champions Germany, USA and China.