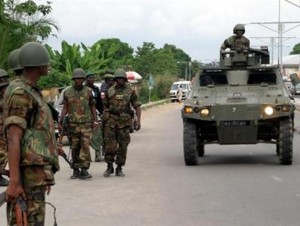 Bomb blasts and sporadic gunshots were heard in parts of troubled Maiduguri Friday forcing many residents run into their homes for safety.

This left most of the major roads in the town during the peak working hours deserted with people afraid of being caught up in the bomb blasts and gunshots, which no one knew the direction they were coming from.

Confirming the incident, the spokesman of the Joint Task Force, Lt. Col. Sagir Musa in a press statement said: “A JTF patrol vehicle was attacked at about 1300 hrs today (Friday) in Shehuri general area by suspected Boko Haram terrorists and the attack was resisted.”

He added: “The incident led to the killing of two Boko Haram terrorists, two JTF personnel were wounded and are stable and are responding to treatment at UMTH.
“Twenty-five suspects have so far been arrested in connection with the episode.”

Speaking further he said: “Similarly, an improvised explosive device was detected by our troops and defused by the bomb disposal unit of the task force.”
He said this incident “occurred at Bulumkutu area of Maiduguri metropolis today (Friday) at about 1130 hrs.”

Musa stated that “Following intelligence report, a special operation was conducted on Thursday, July 26, and early hours of Friday, 27 July, 2012 in Maiduguri.

“The operation led to the arrest of 26 suspected terrorists believed to be members of the terrorists group at Biafra Bula-Bulin, Kasuwan Shanu and GRA in Maiduguri metropolis.”
Musa said that the suspects were believed to be the brains behind the killing of two Indians on Wednesday in Maiduguri.

“Some of the suspects were responsible for the killings of two Indians, a cleric and several others in Maiduguri in the recent past.’’

“We also recovered a primed Improvised Explosive Device, which was detonated by the Bomb Disposal Unit of the JTF as well as cutlasses, daggers and charms.

“There was also a blood stained cloth used during the killing of a cleric in Kasuwan Shanu, Maiduguri.” Said Musa