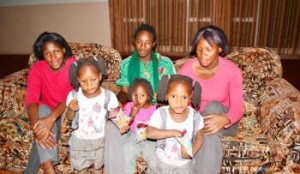 It has been said that twins share almost everything but sharing a husband may seem unimaginable. But Zambia’s Livingstone-based twin sisters Gracious and Grace are happily married to a man they gave conditions to, they said “take all or none.

The Tswana, Botswana twins are married to 25-year-old Kays Kaundula, who lives in Livingstone Island in Zambia.
Kaundula, his wives Grace and Gracious and his three daughters from the two twin sisters show off their family and lifestyles.
Kaundula runs his own motor vehicle mechanical workshop in Livingstone Island’s residential area and shares a house with his wives.
Kaundula however was later to discover that the sisters shared a cell phone and that in his conversations he proposed love to both sisters and both accepted.
A visit to plot 140, the residence of Kaundula, was met with a sweet greeting of small twin girls, who are Kaundula’s four-year-old daughters from Gracious.
Gracious and Grace seem happily married and Gracious even says when her daughters grow up and decide to get married, she would want them to get married to one man.

“I want them to be together just like us. This is what we set for ourselves as we grew up and we are happy that we have achieved what is good for us and our children,”she says.

Asked what they would do if Kaundula decided to get another wife since he was already in a polygamous status, the two sisters at the same time reply,
“we will divorce him.”
Kaundula’s marriage is one which he says he first could not understand as he was first confused when he met the two sisters.

“I was picked by an amateur football team to play in Gaborone in Botswana and after one game as I walked out of the stadium I was greeted with a sweet voice from one of my wives, I can’t tell who. I was told that I had played a nice game.

“From there I continued talking to her or now realise that it was them on a cell phone as I later discovered that they were using one phone so I was talking to either of the two every time I called,” Kaundula says.

He says their relationship continued from phone conversations until he was later to meet them again as if by destiny’s design in Livingstone when they visited one of their sisters.

“After I left Botswana, I enrolled at Livingstone Institute of Business and Engineering studies and I happened to one day meet one the twins when they came to visit their sister who was staying near the institute and from there here we are,” he said.

Kaundula, who is chief executive officer of Kays Auto Services dealing in engine overhaul, servicing, electric repairing and motor vehicle repair consultancy, says he was told by the twins when he proposed that they wanted to get married to one man and if he was not ready, he would have neither of them.

“I proposed and they told me that they have been discussing my proposals which I had been advancing through the phone. Mind you it was one phone that they shared and at that time they were much slimmer than now and I could not tell them apart, so I accepted and got married in 2007.

“My dowry was paid to my mother in-law who has since passed on in Botswana,” Kaundula says.

He said he underwent a few difficulties with his own family when he told them of the marriage arrangement.

“Some opposed and others seemed to agree but also said I was overloading myself. One funny thing I realised later was that on the day I met the twin in Botswana, I was greeted twice by a person I thought had greeted me earlier.

“I did not know that they were twins. It also surprised me that I fell in love with both of them and when I proposed they also said I would get none unless I got them both. They say love is not shared but for me it’s shared equally,” he says.

He says that he can now tell his wives apart, unlike the early days when he first met them. Kaundula says they would both answer to any of their names when he called.

“When I call and say Grace I would get a ‘yes’ at the other end when actually I was talking to Gracious. I have three daughters; one with Grace and twins with Gracious. I have Chiluba and Chipo aged four and one month old. Chiluba who is named after my only surviving sister who is a teacher in Mansa and the other after my other sibling Chipo who is in Lusaka.

“My other daughter from Grace is Blessings. I also have another brother in Lusaka (named) Paul,” Kaundula said.
Asked how people in the community react to the marital arrangement, Gracious and Grace say they have been told that they did a right thing.

“Our friends say we did a good thing and they envy us. I work at Tukale Lodge and my sister is at home helping with the children. On your question of him bringing another wife our only resolve would be to divorce him, we are very happy with the way we are staying as a family and that is what we want for our children,” Gracious says.

The sisters say they are the last children in a family of five and that all their relatives who are in Botswana approve of their marriage.

Kaundula has continued with his football career with Blue Arrows Football Club who train at the Zambezi Sports Club under the sponsorship of the Zambia Air Force.