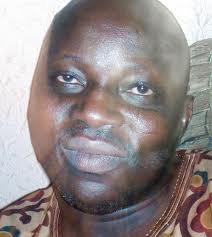 This Shina Rambo is the now-retired armed robbery kingpin who terrorised the whole of the South West in the 1990s, and NOT Davido’s cousin, the rapper (one wonders why that one chose that name in the first place!). His real name is Omokenwa, and report has it that he is known to have been leading a prison ministry in the country for a while now.

Shina Rambo, in his story, said that after terrorising the South west in 1990s, he gave himself up to the police, was convicted and sent to prison (Agodi in Ibadan) from where he was released after serving 11 years. According to him, he met the Lord miraculously through a chance encounter in prison with Prophet T.O. Obadare and since then his life had not remained the same.

Now an evangelist, news has it that he will be leading a power crusade to rid the Lagos Island of criminals and miscreants who daily make life unbearable for people in the central business district of the commercial capital of country.

Pastor Segun Braimoh, the pastor in charge of the Lagos branch of Word of Life Bible Church, Lagos, said the Lagos Island Power Crusade with the theme: “Divine Visitation”, is scheduled for August 2-4, 2012 and it will hold at the popular Oluwole Park, a reclaimed area of Lagos erstwhile regarded as the centre for forging all kinds of documents. According to Braimoh, Evangelist Shina Rambo, whose real name is Omokenwa, has agreed to share his testimony of conversion at the three-day event and preach the undiluted Word of God with a view to winning the souls of the area boys in Lagos Island for Christ and enthrone a regime of peace in the area.