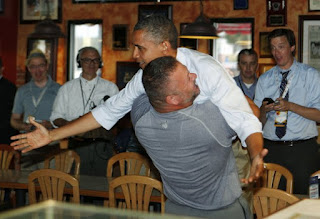 A massive Bear hug was what President Barack Obama got from a Florida pizza shop owner Scott Van Duzer  at his Fort Pierce, Fla store. Van was simply expressing his love just like that expressed to Michelle Obama when a female weight lifter lifted her totally off the ground.
Van Duzer is a registered republican who says he’ll vote for Obama in November.
The friendly conversating Barack and Van had was:
“Scott, what’s going on, man,” the president called as he arrived. “Let me tell you, you are like the biggest pizza shop owner I’ve ever seen.”
“Everybody, look at these guns,” Obama said as he chatted with Van Duzer, who is 6’3″ and weighs 260 pounds. “If I eat your pizza will I look like that?”
Imagine President Goodluck Jonathan was lifted as such in Mr Biggs, what would have been the reaction that’ll follow?