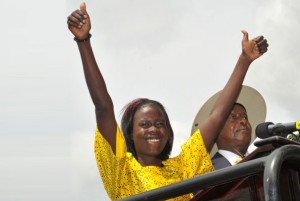 A lot of people might quickly want to wave this aside as the “Children Parliamentarians” thing we have in this part of Africa; or the One Day Governor arrangement which has become relatively popular in Lagos State. NO. This is real African politics!

Proscovia Oromait, a female teenager, has contested an election and won a seat in Uganda’s parliament, adding to the ruling party’s majority. Oromait, who is 19 and a college hopeful, contested elections in eastern Uganda to fill the seat left vacant by her father’s death.

While President Yoweri Museveni’s ruling party had been desperate for a win there – having lost seven in eight parliamentary by-elections this year – the polls have come to be widely seen as a test of Museveni’s popularity, and some party bosses calculated that she would win with a sympathy vote.

According to Michael Mukula, a lawmaker who is one of the ruling party’s deputy chairmen, “I am a bit concerned and taken aback because of her lack of experience and lack of exposure… This is not a constituency you want to give a child of that age to shoulder.”

As a lawmaker, Oromait will be representing a place called Usuk, where dirt roads become flooded in the rainy season and where there is only one functional high school. This rural constituency of some 100,000 people is said to be thoroughly impoverished, even by Uganda’s standards.