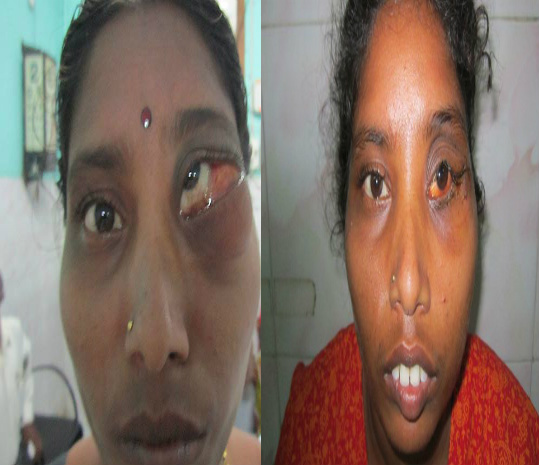 In what seemed like an unbelievable event, doctors had their hands full in addition to their already dazed minds .Doctors operating on a tumour in Nagabhushanam Siva’s left eye were stunned to find the two fully-formed teeth embedded inside.

When asked, the 23year old said: “I was born with an abnormal left eye and it continued to swell over the years. My family was too scared to send me to see a doctor and during the last few years it has grown much bigger. I had blurred vision so eventually I consulted a doctor for help.”

Teratoma was the diagnosis that was given to Nagabhushanam by doctors at a government hospital in Chennai, southern India. The tumour had pushed her eye inside its socket and protruded the skin, blocking her vision and partially damaging the optic nerve. The growth also left her unable to move her eyeball and had developed lazy eye syndrome.

Doctors said they had seen a few past cases of Teratoma with tooth-like tissues embedded in the tumour, but fully formed teeth were very rare. Hospital Director, Dr K Vasantha, said: “A Teratoma is a mass of tissue that contains cysts and sometimes contains hard tissues but fully grown teeth is so very rare.”

The removal of the tumour caused severe damage to Nagabhushanam’s optic nerve which has tragically left her permanently blind.

“Because it was left untreated all these years the tumour was allowed to grow to extraordinary lengths. That resulted in the optic nerve damage,” Dr Vasantha added.

Orbital Teratomas are rare embryonic tumors composed of tissues that grow in the attempt to form an organ. The first case of this condition was reported 149 years ago. Only 70 such cases have been found worldwide ever since.