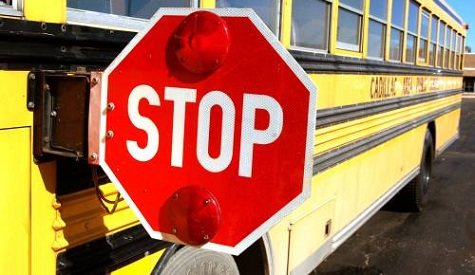 In a bizarre move, an Ohio woman stuck in traffic behind a school bus decided to show her smartness and took matters into her own hands as she drove her SUV up onto the sidewalk. Unfortunately for her, it was caught on tape, and now the judge has handed down a punishment as bizarre as her driving.

Shena Hardin has had her license suspended for a month, will pay a $250 fine, and has to stand in a busy intersection wearing a giant sign. Aren’t you curious to know what it says?

“Only an idiot would drive on the sidewalk to avoid the school bus.”

Maybe this is one of those situations where the punishment fits the crime. Hardin was arrested in September after a bus driver recorded her in the act which, apparently, was not the first time she’d pulled the stunt. She would want to have to wear that kind of dress again…maybe this would make her stop pulling stunts.