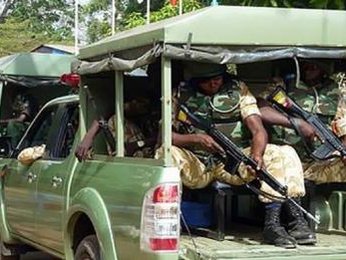 Clashes have erupted in Kuru, near Jos, Plateau State, between the military Special Task Force and residents after a local was shot dead by unidentified assailants Sunday night.

Residents blame the military for the shooting which also injured another resident; but the STF, has denied the allegation.

The STF said the victims were hit by “stray bullets” from unidentified attackers who opened fire indiscriminately on Sunday.

Troop reinforcements were being sent to the area to restore normalcy, a spokesperson for the STF said.

The protesters accused the military of “constant and consistent killings’’ of their kinsmen, an allegation that has repeatedly surfaced for years in the troubled north central state which has seen years/ bouts of sectarian conflicts.

The military said Sunday’s attackers were yet unknown, but that it was clear that the shootings targeted no one.

“The attack was carried out by some unknown men who just fired indiscriminately and ran away. In fact, there are no STF men stationed at the point where the attack happened,” Salifu Mustapha, a captain, was quoted as saying.

“The bullets from these attackers were not aimed at anyone in particular and that is why I say they were stray bullets. Right now, we are trying to find out who carried out the attack, but the youths are distracting us; I don’t know why the youths should blame the soldiers over such crime and follow that up by taking the laws into their hands,” he added.

Mr. Mustapha said the attackers were being trailed but the STF needed to restore calm following the protest. Some of the protesters were arrested, he said.

“For now the road is closed but very soon the road shall be opened for vehicular movement,’’ he said. “We have made some arrests, but I don’t know how many. I can only confirm that later.’’ (NAN)