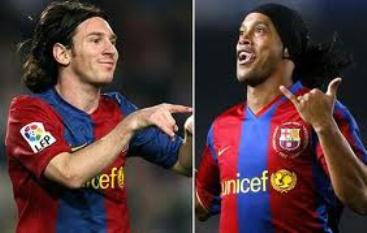 Ronaldinho gave this indication while paying tribute to Messi, who Sunday, became the highest goalscorer in a calendar year after surpassing German great, Gerd Muller’s record of 85 goals set forty years ago.

“For me Messi is the best in the world,” he added. “For the last few years he has played at a level of football we have never seen before.

“I’m very proud to speak of him, because I was there when he started off and now he is the best in the world, it makes me so happy.

“The game I remember the most is when he scored his first goal, because it came from my pass and I remember this game most vividly because he was just getting started.

“I had the chance to be there and live that moment. I’m very happy that his first professional goal came from a pass from me. Messi knows that there will always be a place in my heart for him.”