Home Lifestyle Get Kids To Do Tasks With App That Rewards Children For Doing...
Facebook
Twitter
WhatsApp 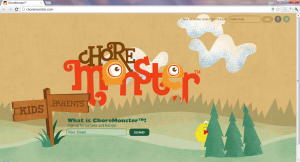 A new Application has been designed to encourage children to do chores by turning the tasks into a game and giving them points when it is completed.

The app called ChoreMonster, available for iOS devices and on the web, aims to make household chores, such as setting the table, feeding the pets or unloading the dishwasher, fun.

“There are usually enough chores in a week to redeem some sort of reward,” said Chris Bergman, the founder and CEO of Cincinnati, Ohio-based Company ChoreMonster.

The rewards, which are provided by the parents, can range from privileges like sleepovers or a family outing, to video games or a cash allowance.

“It’s exactly what you would expect kids would want and also more esoteric rewards,” Bergman explained.

Parents assign chores through the app and include the completion dates along with the number of points the child will earn. They also set rewards, including the number needed to receive them.

When the task is done, the child marks it in the app and the parent is notified and prompted to verify that it was completed well. After the parent approves the task, the child is awarded the points.

The app helped 21,000 children complete more than 300,000 chores during the eight months it was tested before being launched at the end of 2012, according to its makers.

Making the bed, picking up toys and books, cleaning the bedroom, feeding pets and dealing with dirty laundry were among the main chores. Top rewards included ice cream, an allowance, movie night, sleepovers and computer time.

“What I find really interesting is that a lot of times the reward is just empowering the child to make their own decision,” said Bergman, adding it be could be selecting what to have for dinner.

The most obnoxious rewards he has seen have been large amounts of cash.

“I get why parents use it, but the point system alone is enough to teach saving and spending. Cash becomes this middle ground and another step to whatever it is the child actually wants,” Bergman explained.

A similar web and iPad app called HighScore House lets parents and children agree on a set of tasks and the rewards they will receive for completing them.

ChoreMonster is available worldwide in more than 50 countries and is ideal for children between four and 12 years old, according to Bergman. [Reuters]