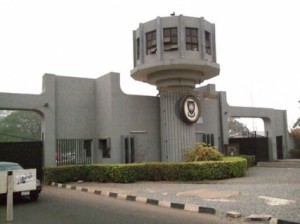 The Vice Chancellor of the University of Ibadan (UI), Professor Isaac Adewole, has insisted that the institution is not only the first university in Nigeria, but the best so far in the country, in terms of products and resources.

The UI VC made the claim in Ibadan, on Wednesday, together with the Director, Office of International Programmes, UI, Professor Bola Udegbe, at the recognition ceremony of the Alumni Engagement Innovation Fund (AEIF) Project of the United States government.

The university had, in two successive years, won the grant provided by the US government, as the 2012 winning project, “Going Green, e-Waste to Wealth,” funded to the tune of $24,250, was won by Dr Olumide Longe-led team. The Vice Chancellor, who was represented on the occasion by the Dean, Faculty of Arts, Professor Remi Raji, said the feat was not surprising, while he urged Dr Longe of the Department of Computer Science not to be discouraged, as the country needed scientists of his like to help it develop.

Also, Professor Udegbe, represented by Professor Kolawole Owolabi, said the university remained outstanding in the country, adding that for the institution to, again, be the recipient of the award is more feathers to its cap. Speaking before the presentation, the Public Diplomacy and Cultural Officer of the US Consulate General, Lagos, Mrs Rhonda Watson, who said she was happy to be in the Nigeria’s oldest university, added that “in 2012, the competition was equally as fierce; but once again, the University of Ibadan came out a winner.