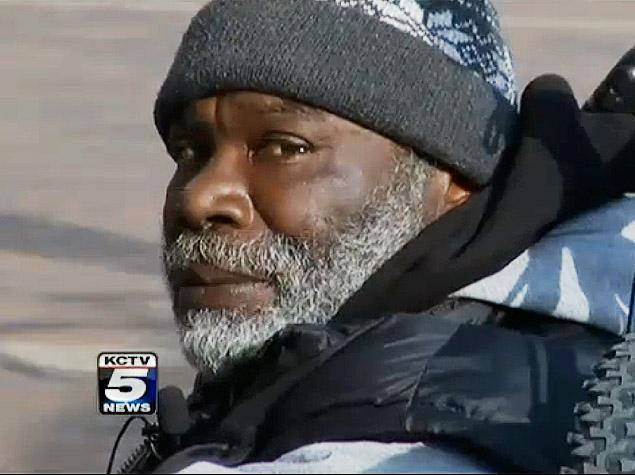 A homeless man’s good deed has not gone unnoticed.

When Billy Ray Harris, a homeless Kansas City, Mo., man, returned a diamond and platinum engagement ring to the woman who had accidentally dropped it into his beggar’s cup, he wasn’t looking for a reward.

“My grandfather was a reverend. He raised me from the time I was 6 months old, and thank the good lord. It’s a blessing, but I do still have some character,” Harris told KCTV5 last week.

Floored by his honesty, Sarah Darling and her husband, Bill Krejci, dug into their wallets the day they recovered the ring and gave Harris all the money they had on them as a reward.

Days later, after the story was picked up by news outlets, Krejci, who works as a Web designer, said he realized he wanted to do something more for Harris.

“My wife was interviewed, and I noticed that on some websites people were asking how they could help Billy Ray,” Krejci said. “That’s when I got the idea to start the campaign.”

Krejci went to the site GiveForward and started a page where donations are being collected for Harris over the next 90 days.

“The idea was maybe to come up with a couple hundred dollars, something nice for him,” Krejci said. “But now we’re talking about an amount that could really make a difference.”

Nate St. Pierre, director of communications for GiveForward, said that his staff alerted him to the flurry of activity on Krejci’s page over the weekend.

“A couple of days ago we noticed it was really starting to gain traction,” St. Pierre told The News. “He (Krejci) put the goal at $1,000, and had no idea it would get so big.”

As of Tuesday evening, donations to Harris were nearing $14,000, and the “fundraiser,” as the site calls it, isn’t scheduled to end until May 15.

So far, Krejci hasn’t been able to find Harris to tell him of the outpouring of support.

“I went down to try and tell him, but I couldn’t find him,” Krejci said. “My main concern is his privacy. I don’t want people bugging him.”

Krejci says that he has been talking to GiveForward advisers about how best to deliver a payment to a homeless man.

“My feeling is that he’s not going to go out and do something stupid with the money,” Krejci said. “He’s just a really cool guy, and I’m hoping this will give him a better foundation.”

Though he has only spent limited time getting to know Harris, the two have talked about their shared passion for music. Harris used to do sound for local bands, while Krejci worked as a roadie.

The main reason that the public has been so moved by this story isn’t hard to fathom, Krejci says.

Noting the hundreds of comments and donations the GiveForward campaign has received so far, St. Pierre agrees.

“I really love this story,” St. Pierre said. “The staff is all pulling for him