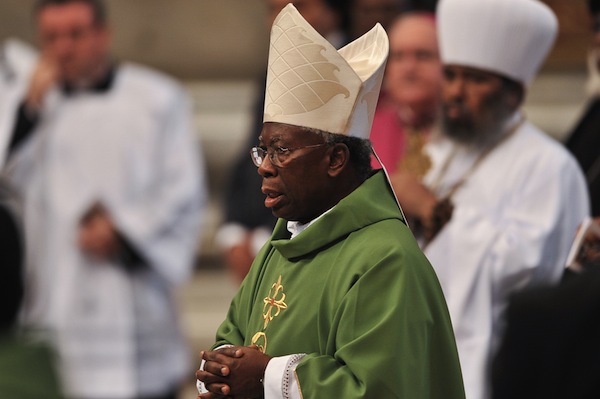 LONDON  (AFP) – Francis Arinze of Nigeria, Peter Turkson of Ghana and Marc Ouellet of Canada were among the cardinals hotly tipped by bookmakers on Monday to take over from Pope Benedict XVI.

William Hill bookmakers named 80-year-old Arinze as their favourite to replace the pontiff following Monday’s shock announcement of the pontiff’s resignation with odds of 2-1, followed by Turkson at 5-2.

Coral also tipped Arinze as the likeliest successor with odds of 7-4, followed by Turkson at 2-1 and Ouellet in third place at 5-1.

The bookmaker also offered odds of 8-1 on Archbishop Angelo Scola of Italy and 10-1 on Cardinal Oscar Rodriguez Maradiaga of Honduras.

Irish bookmaker Paddy Power named Ouellet as the favourite with odds of 5-2, followed by Arinze at 3-1 and Turkson at 4-1.

During the 2005 conclave of the Vatican’s College of Cardinals that elected Benedict, Arinze was considered “papabile,” or a potential successor to the late John Paul II.

“When we opened betting last time around, in 2005, Francis Arinze was our favourite,” a William Hill spokesman told AFP.

“His odds did drift towards the date of the announcement when Joseph Ratzinger (later Pope Benedict XVI) became the favourite, but he remained in the top three.

“Also, when Ratzinger became pope, Arinze took over from him as cardinal bishop of Velletri-Segni (a Catholic diocese close to Rome) — it could be that he’ll follow in his footsteps again.”

A quarter of the cardinals that can elect a new pope are Italian. The last non-Italian pope before Benedict, who is German, and his Polish predecessor John Paul II was Adrian VI, who died in 1523.

Arinze and Turkson, the head of the Pontifical Council for Justice and Peace who is considered a progressive candidate, are among 18 Africans in the Vatican’s College of Cardinals.

Ouellet, a respected theologian who heads up the world’s bishops and is seen as a “modern conservative”, has also been frequently named in Vatican circles as a possible successor to Benedict.

At the humorous end of the scale, Coral was offering 2000-1 on disgraced cyclist Lance Armstrong becoming pope.