An Afghan teenager who was horribly mutilated by her husband under Taliban rule was all smiles as she unveiled her new prosthetic nose for the first time. Aisha, 19, shocked the world when she appeared on the cover of Time Magazine to lift the veil on the plight of many women in Afghanistan. 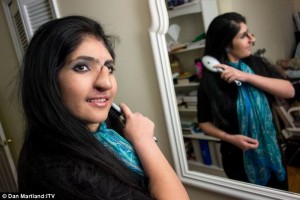 Yesterday, she bravely faced the public wearing a prosthetic nose – one that gives her some idea of how she will look after having reconstructive surgery. She went before the TV cameras to receive the Enduring Heart award at a benefit for the Grossman Burn Foundation – the Los Angeles-based organisation that paid for her surgery. She was given the award by California first lady Maria Shriver.

Arnold Schwarzenegger’s wife told the audience: ‘This is the first Enduring Heart award given to a woman whose heart endures and who shows us all what it means to have love and to be the enduring heart.’ Aisha, whose surname has not been revealed, replied: ‘Thank you so much.’

When Aisha was 12, her father promised her in marriage to a Taliban fighter to pay a debt. She was handed over to his family who abused her and forced her to sleep in the stable with the animals.

When she attempted to flee, she was caught and her nose and ears were hacked off by her husband as punishment. ‘When they cut off my nose and ears, I passed out.

In the middle of the night it felt like there was cold water in my nose. ‘I opened my eyes and I couldn’t even see because of all the blood,’ she told CNN reporter Atia Abawi.

Left for dead in the mountains, she crawled to her grandfather’s house and her father managed to get her to an American medical facility, where medics cared for her for ten weeks. They then transported Aisha to a secret shelter in Kabul and in August she was flown to the U.S. by the Grossman Burn Foundation to stay with a host family.

This month, she had a prosthetic nose fitted at the non-profit humanitarian Grossman Burn Center at West Hills Hospital in California as part of her eight-month rehabilitation. Dr Peter H Grossman said they hoped to give Aisha a more ‘permanent solution’.

This could mean reconstructing her nose and ears using bone, tissue and cartilage from other parts of her body. Dr Grossman’s wife Rebecca, the chair of the Grossman Burn Foundation, said Aisha was just one of the thousands of women who are treated with appalling harshness.

She said: ‘Aisha is reminded of that enslavement every time she looks in the mirror. But there are still times she can laugh. And at that moment you see her teenage spirit escaping a body that has seen a lifetime of injustice.’