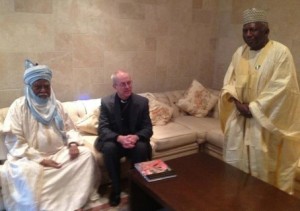 The Archbishop of Canterbury, Archbishop Justin Welby on Sunday in London condemned the attack on the Emir of Kano, Alhaji Ado Bayero, describing it as “disgraceful” and “atrocious”.

Welby said this when he paid a sympathy visit to the royal father, who was flown to London following the attack in Kano by unknown gunmen.

The gunmen attacked the emir’s convoy along Zoo road, near Sahad Stores, last month, killing his driver, his orderly and a traditional guard who tried to protect him.

The emir’s two sons who were also in his convoy, were injured.

“I am here to bring my condolences on the disgraceful and atrocious attack on His Royal Highness.

And on the loss of some of his staff, which is something that is a great shame and I rejoice that His Royal Highness himself was unharmed in the attack.

” I pray for you and all those in Nigeria who carry out the work of peace, reconciliation and seek to bring Nigeria to the place where it is supposed to be in strength and prosperity against the terrorists,” Welby said.

Responding, Bayero expressed has appreciation for the visit and congratulated Welby on his appointment.

The emir, who spoke in Hausa through the Chiroman Kano, Alhaji Sanusi Bayero, commended the role of the Anglican Communion in promoting peace and unity in Nigeria.

The Archbishop was received by the Nigerian High Commissioner to the United Kingom, Dr Dalhatu Tafida, and the Turakin Kano, Alhaji Nasir Bayero. [NAN]