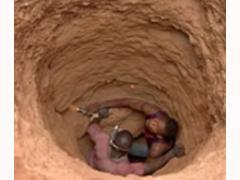 It was gathered that at least 27 illegal miners were buried alive in their pits at Obuasi in the Ashanti region on Wednesday March 20, 2013 during a joint operation by the National Security outfit and the Ghana Armed Forces, aimed at destroying and sealing off illegal mining pits in the area.

Secretary to the Small Scale Miners Association in Obuasi, Rufus Borry alleged on Wednesday in an interview with XYZ News that “some of our colleagues were buried alive by the National Security Operation”.

They had been trapped in the belly of the earth for more than 48 hours.

Rufus Borry who confirmed the rescue of the trapped miners to XYZ News said the exercise was done with the help of officers from the Ghana Armed Forces and the Bureau of National Investigations.

He however expressed concerns that a few of the miners could still be trapped in the belly of the earth.

Soldiers stormed some mining towns in Obuasi on Wednesday with bulldozers and other heavy earth moving equipment and machines to seal off all illegal mining pits without warning, according to Mr Borry.

The National Security-led operation angered scores of the small scale miners, who poured out on the streets to demonstrate.

Four of them were shot as they protested on the streets.

The Obuasi Police Command confirmed to Journalists at a press briefing on Thursday March 21, 2013 that three of those shot escaped from the Bryant Mission Hospital where they had been taken for treatment.

The other was transferred to the Komfo Anokye Teaching Hospital for further treatment.

Mr. Borry told XYZ News that the Security Agencies had earlier told the local miners that the operation was meant to target only illegal foreign miners, mostly the Chinese.

He therefore expressed surprise at the turn of events.

The exercise formed part of the Government’s attempt to flush out illegal miners (Galamseyers) from Ghana.

The Director of Public Affairs at the Ghana Armed Forces, Col Atintande M’bawini told Obuasi-based Time FM on Wednesday that as part of measures to ensure that illegal miners don’t return after they had been flushed out, the joint exercise had adopted a strategy of staying and mounting surveillance in areas where they have crippled the illegal mining activities.

He noted that: “The intention is not to kill people; it is just to stop the incidence of illegal mining”.

He however warned that those who resist will be arrested adding that: “In some place where they carry offensive weapons, off course if you fire at us we’ll fire back at you, there’s no big deal about that”.