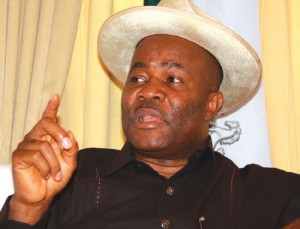 Governor Godswill Akpabio of Akwa Ibom State has confessed to manipulating the result of a 2007 Peoples Democratic Party Senatorial primary election in the state by replacing the actual winner with the name of his preferred candidate who lost in the primary.

A delegation of the National Good Governance Tour visited the state on March 9, and Akpabio in the spirit of good governance was honest with them, and made the confession.

The tour led by the Minister of Information, Mr. Labaran Maku was recorded with a video camera. The video went viral on Sunday, and was as of 8.47pm viewable on the website of an online Nigerian news portal, Premium Times via premiumtimes.com.

The governor apparently was unaware he was making a confession as he was just trying to defend his claim of being fair to the people of Ini and Ikono, as he was put to him that he had not impacted the lives of the people of the two communities, especially in the area of roads, schools and other public infrastructure.

The communities which form part of Ikot Ekpene Senatorial District felt harshly done by, but Akpabio refuted their claims saying he struck out the name of the person who won the PDP Senatorial primary election and replaced it with Aloysius Etuk, who went ahead to win the senatorial election, and still serves as a Senator of the Federal Republic of Nigeria having won a reelection in 2011.

“The people of Ikono and Ini (Local Government Areas) from 1960 have never produced a Senator.

“I used my own hand to strike out the name of the person who has won before, and I said it is important for me to give that region a Senator in 2007, and I produced Senator Aloysius Etuk for you; that’s where he comes from.”

Senator Etuk confirmed the claim as the governor asked him to stand up and ‘take a bow’ at the town hall meeting.

The governor’s confession shocked many in attendance, but he later sought to clarify it as he was hinted of the implications.

He said, “So, I must say that I thank all of you, including the members of the National Assembly led by Senator Aloysius Etuk. And when I said that I made Aloy(sius Etuk) to become a senator in 2007, I need to explain it so that you don’t think that I wrote his name and he became a senator.