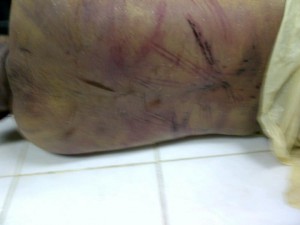 Alhaji Bala Adamu, has demanded N11million as compensation for the alleged torture to death of his son by the police over alleged defamation of character.

The 65-year-old man from Yashi village in Duguri district of Alkaleri Local Government Area, Bauchi State, who was accompanied by the state officer of the Bauchi State Legal Aid Council, Mr Muhammad Hanbal, alleged that his 25-year-old son, Bala Babangida, was tortured to death by the police while in detention.

According to him, his son was severely beaten by a policeman identified as Musa Abdul, while in cell at the Maina Maji Police outpost in Alkaleri Local Government Area, which subsequently led to the 25-year-old’s death.

The aggrieved old man said the problem started when one Dan Bauchi, a resident of Yashi, reported his son at the police station in Alkaleri on July 23, 2008 for allegedly defaming him.

“On reaching the police station, I was able to secure bail for my son, but I could not recognize him because he had been badly tortured. His younger brother had to carry him home because he was too weak to walk. My son managed to take a bath and I tried to find out from him why he was arrested and tortured.

“He told me that Musa, the policeman was the one that tortured him and that he was innocent of the allegations levelled against him by the said Dan Bauchi. He said the policeman kept beating and marching him in the cell,” Adamu narrated.

Speaking further, Adamu said that he went to the police station the next day to ask the police to accompany his son to the hospital but the police refused hence he had to seek the help of a lawyer who stood as a guarantor before his son was admitted at the Specialist Hospital, Bauchi, where he died.