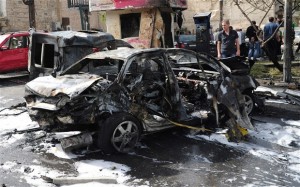 13 people have been killed and over 70 others injured in a blast near Syria’s interior ministry in the central Damascus district of Marjeh, according to state television, just a day after the country’s prime minister survived a car bomb attack.

The group, which relies on a network of activists based in Syria, did not immediately provide details on those reported casualties, but warned that the number of casualties was expected to rise.

Saudi Arabia, Qatar and Turkey have been at the forefront of backing Syrian armed opposition while the United States has provided “non-lethal aid” to groups fighting Bashar al-Assad’s regime.

Regarding whether the recent bomb attacks are a response to the government counter-offensive on rebel strongholds, Shehadeh said: “The Syrian army is doing an excellent job in the Damascus suburbs and the countryside, as they have directed a big blow to the terrorists in many of the areas they are based in. The Syrian army and state is closing in on them day after day.”

Damascus has seen a wave of major bombings in recent weeks, including on April 9, when a massive blast in the centre of the city killed at least 15 people.