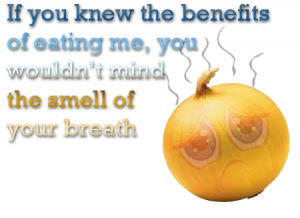 Onions have been used for thousands of years as an ingredient in various dishes by many cultures around the world. These vegetable can be eaten raw, cooked, fried, dried or roasted. They are commonly used as a flavouring and seasoning agent in many dishes. Apart from added an excellent taste to dishes, onions are also provides many health benefits to its users. In Chinese medicine, onions have been used to treat angina, coughs, bacterial infections, and respiratory problems. And even the World Health Organization (WHO) also supports the use of onions for the treatment of poor appetite and preventing atherosclerosis. Some health benefits of onions are as given below:

Onion extract is rich in a variety of sulfides, which provide some protection against tumor growth. Some studies have showed, regular consumption of onions helps to reduce the risk of several cancers such as colorectal cancer, oral cancer, laryngeal cancer, stomach cancer, esophageal cancer, and ovarian cancer. It is suggested to consume one onion serving per day (approximately 1/2 cup).

The regular consumption of onion has been shown to lower high blood pressure and high cholesterol levels. This is attributed to the sulfur compounds, chromium, and vitamin B6 in onions, which helps prevent heart disease by lowering high homocysteine levels, another potential risk factor for heart attack and stroke.

The regular consumption of onions also have been shown to lower the blood sugar levels. A study found that, onions contain allyl propyl disulfide that helps to reduce the glucose levels by increasing the amount of insulin.

Onions packed with enormous flavonoids, these flavonoids help to reduce the risk of colon cancer. It has been shown to inhibit the growth of tumors in animals and to protect colon cells from the damaging effects of certain cancer-causing substances.

The onions help in stimulating the circulation of blood in the mucous membrane. It can be applied as poultice to boils, bruises, wounds, etc. Onion juice mixed with honey also can be the best home remedy for acne.

Onion is rich in sulfur which is one of the essential nutrients in promoting hair growth. A study has shown that applying onion juice on scalp twice a week for 2 months will stimulates hair regrowth.

Onion is an effective remedy for cholera. Grind about 30 grams of onions with 5-7 black peppers. Have 2-3 times of the mixture a day. This is effective treatment for cholera. On the other hand, this also helps to lessens diarrhoea and vomiting.

A study revealed that onions also possess the ability of building connective tissue and bone health due to a newly identified substance in it called growth plate chondrocytes (GPCs). Hence onions are very beneficial for women who are at a risk for osteoporosis. There is also evidence to suggest that the risk of hip fracture in menopausal women may be lowered through regular consumption of onions.

Onion is also a great remedy for cold and flu. The Native Americans used them to ward off the common cold and flu. The World Health Organization has even recognized the onion for its ability to help relieve flu symptoms such as coughs, bronchitis, congestion, and respiratory infections.

Recent research shows that onions may kill bacteria that cause tooth decay and other dental problems. Chewing a raw onion for two to three minutes could kill all the germs in the mouth. Placing a small piece of onion on the affected tooth or bad tooth can also help in relieving toothache.

Onion has diuretic properties, which are useful in treating urinary disorders. For those suffering from burning sensation during urination, drink water boiled with 6 to 7 gm of onion, this may relieve the symptoms.

Onions are considered as natural anti-clotting agents. The sulfur contents in the onions can suppress clumping of platelets thereby help in preventing blood clot.

Onions are a good source of dietary fibre and prebiotics that encourage the growth of good bacteria (probiotics) in the digestive system, thereby improving digestive function.

The onions such as red onions are rich in Quercetin, an antioxidant which is known to have anti-inflammatory and anti-allergy properties. Flavonoid contained in them blocks the allergy creating histamine and other substances. According to a recent study, eye symptoms associated with hay fever are greatly reduced by quercetin. Suggested dosage is 200-400 mg thrice a day.

The quercetin found in onions, along with other substances, help promote a healthy immune system. These substances act as anti-inflammatory agents, which reduce the effect of inflammatory diseases such as rheumatoid arthritis.

When buying onions, choose the fresh ones that are clean, well-shaped, and have no opening at the neck. Avoid those that show sprouting or have signs of black mould as they indicate that the items are old. In addition, poor quality bulbs often have soft spots, moisture at their neck, and dark patches, which may all be indications of decay.