Home Politics Amnesty: Boko Haram Should Be Sent Back To Hell Where They Come...
Facebook
Twitter
WhatsApp 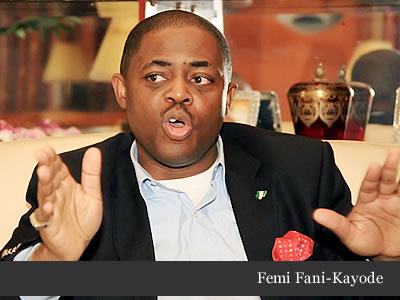 Former Minister of Aviation, Chief Femi Fani-Kayode, has accused the President Goodluck Jonathan-led administration of failing in its responsibility of protecting lives and properties of Nigerians due to its inability to tackle the menace of Islamic fundamentalists headlong.

Fani-Kayode who was speaking at the residence of the Awolowos in Ikenne Ogun State on Saturday when he paid a condolence visit to the Matriarch of the family following the death of Oluwole Awolowo, expressed displeasure over what he described as lackadaisical attitude of government in curtailing the activities of the dreaded sect.

“I have lived in the North for 10 years and I do not in anyway owe any kind of apology for people that make the business of killing others in the name of their religious faith to impose their faith on others; both Christians and Muslims.

“As far as I am concerned, this government has failed. It is a matter of law and order to protect the lives and property of Nigerians. 4,200 in a spate of two years is a record outside civil war.

“It has never happened since 1914 apart from 1960 that 4,200 Nigerians have been slaughtered like chickens and goats by one terrorist organisation in the spate of only two years. That is the record and legacy of this government as far as I am concerned.”

He wondered why the Federal Government embraced granting amnesty to the sect when it could use its might to fight them, saying that the fight should be “battle to the finish” on the part of the government.

The former minister urged the government to do the right thing by fighting Boko Haram on all fronts.

“Government should rise up to the occasion by doing the right thing and stop the issue of amnesty. They should show strength. It is an insult on the souls of thousands that have been killed for the Presidency to be considering granting  amnesty to the Boko Haram sect.

“I identified with the position of the CAN President and many well-meaning Nigerians; there should be no discussion, no amnesty and nothing for the Boko Haram sect. The only thing they should consider is to send them back to hell where they come from,” he added.