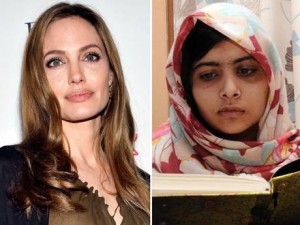 “Today I’m going to announce the happiest moment of my life,” Malala Yousufzai said, adding that a new school in Pakistan would be built for 40 girls. “Let us turn the education of 40 girls into 40 million girls,” she said.

Hollywood star and special envoy for the UN refugee agency, Angelina Jolie was awed by the 15-year-old’s feat, and therefore committed $200,000 (Dh735,000) to the new “Malala’s Fund” for girls’ education in Pakistan.

Malala angered the Taliban for her outspokenness on the need for girl child education, and was shot in the head in her school bus last October.

She was taken to Britain for treatment, where she has been schooling. The 15-year-old was shortlisted for Time magazine’s “Person of the Year” in 2012 and recently signed a deal to write her memoir.

“Here’s what they accomplished,” Jolie said of Malala’s attackers in a video where she paid a tribute to Malala while introducing her to the Women in the World summit. “They shot her point-blank range in the head — and made her stronger. The brutal attempt to silence her voice made it stronger.”

Jolie spoke of when Malala’s father showed his daughter in the hospital, a poll that put her as the sixth most influential person in the world, and US President Barack Obama as seventh. Malala who anyone would expect to be elated just took it with a pinch of salt as she said she didn’t think people should be categorised like that.

“So we can learn a lot from this girl,” Jolie said.