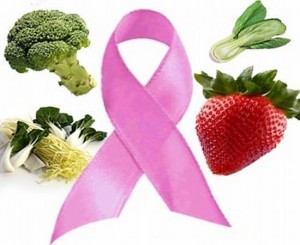 Carrots contain a lot of beta carotene, which may help reduce a wide range of cancers including lung, mouth, throat, stomach, intestine, bladder, prostate and breast. In fact, a substance called falcarinol that is found in carrots has been found to reduce the risk of cancer, according to researchers at Danish Institute of Agricultural Sciences (DIAS). Kirsten Brandt, head of the research department, explained that isolated cancer cells grow more slowly when exposed to falcarinol. This substance is a polyacethylen, however, so it is important not to cook the carrots.

Sweet potatoes contain many anticancer properties, including beta-carotene, which may protect DNA in the cell nucleus from cancer-causing chemicals outside the nuclear membrane.

Avocados are rich in glutathione, a powerful antioxidant that attacks free radicals in the body by blocking intestinal absorption of certain fats. They also supply even more potassium than bananas and are a strong source of beta-carotene. Scientists believe that avocados may also be useful in treating viral hepatitis (a cause of liver cancer), as well as other sources of liver damage.

Grapefruits, like oranges and other citrus fruits, contain monoterpenes, believed to help prevent cancer by sweeping carcinogens out of the body. Some studies show that grapefruit may inhibit the proliferation of breast-cancer cells in vitro. They also contain vitamin C, beta-carotene, and folic acid. Oranges and lemons also contain Iimonene which stimulates cancer-killing immune cells (lymphocytes, e.g.) that may also break down cancer-causing substances.

Red grapes contain bioflavonoids, powerful antioxidants that work as cancer preventives. Grapes are also a rich source of resveratrol, which inhibits the enzymes that can stimulate cancer-cell growth and suppress immune response. They also contain ellagic acid, a compound that blocks enzymes that are necessary for cancer cells–this appears to help slow the growth of tumours.

Papayas have vitamin C that works as an antioxidant and may also reduce absorption of cancer-causing nitrosamines from the soil or processed foods. Papaya contains folacin (also known as folic acid), which has been shown to minimize cervical dysplasia and certain cancers.

Tomatoes contain lycopene, an antioxidant that attacks roaming oxygen molecules, known as free radicals, that are suspected of triggering cancer. It appears that the hotter the weather, the more lycopene tomatoes produce. They also have vitamin C, an antioxidant which can prevent cellular damage that leads to cancer. Watermelons, carrots, and red peppers also contain these substances, but in lesser quantities. It is concentrated by cooking tomatoes. Scientists in Israel have shown that lycopene can kill mouth cancer cells. An increased intake of lycopene has already been linked to a reduced risk of breast, prostate, pancreas and colorectal cancer.

Garlic has immune-enhancing allium compounds (dialyl sultides) that appear to increase the activity of immune cells that fight cancer and indirectly help break down cancer causing substances. These substances also help block carcinogens from entering cells and slow tumor development. Diallyl sulfide, a component of garlic oil, has also been shown to render carcinogens in the liver inactive. Studies have linked garlic–as well as onions, leeks, and chives–to lower risk of stomach and colon cancer

Tapioca is derived from the cassava plant. It is one of the many plants that manufacture cyanide by producing a chemical called linamarine which releases hydrogen cyanide when it is broken down by the linamarase enzyme. Spanish researches have been studying the cassava and attempting to clone the genes from the plant which are responsible for producing the hydrogen cyanide and then transfer it to a retrovirus.

Green Tea and Black Tea contain certain antioxidants known as polyphenols (catechins) which appear to prevent cancer cells from dividing. Green tea is best, followed by our more common black tea (herbal teas do not show this benefit). According to a report in the July 2001 issue of the Journal of Cellular Biochemistry, these polyphenols that are abundant in green tea, red wine and olive oil, may protect against various types of cancer. Dry green tea leaves, which are about 40 per cent polyphenols by weight, may also reduce the risk of cancer of the stomach, lung, colon, rectum, liver and pancreas, study findings have suggested.