For the Sarumi family residing at 2, Adeshina Street, Iju-Ishaga, Lagos state, Southwest Nigeria, it is a case of living in fear following three consecutive attacks on them by gunmen who claimed to be after one of the children of Mrs. Mulikat Taiwo Sarumi. 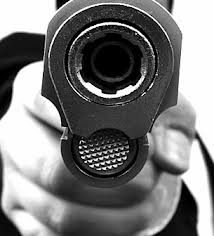 The fear has now been heightened by the killing of their domestic guard, Sunday Abore, a father of two, by the same gunmen during their most recent attack.

According to them, the attackers, who are always masked, have always claimed that their target was in the country while the family members argued that he was in Canada.

Adefolarin’s younger brother, Akinsanya, who said he witnessed the attack on 24 March that resulted in the murder of Abore, explained that the assailants stormed the house at about 1am just hours after they had earlier visited the house to ask for Adefolarin.

He said while he was relaxing outside the house due to heat, he heard a hot argument between the guard and the assailants who were trying to force their way into the compound thinking their target was around.

The gunmen, he said, finally shot the guard after much resistance from him. They thereafter declared that his death should serve as a lesson that they were serious about getting Adefolarin.

“I heard the security man begging them not to kill him; that they should have mercy on his life, that of his wife and two kids, but all of a sudden, I heard a loud noise, I could not move, I was so scared,” he said adding that the family later discovered the lifeless body of their guard outside.

Mrs. Sarumi, whose son is being trailed by the alleged assailants, explained that in an attack which occurred about 1.30 pm on 23 March, the gunmen threatened to shoot her, her daughter and grand daughter if they failed to disclose where Adefolarin was hiding.

The woman said that afternoon, she was watching television when the three men stormed the house in search of Adefolarin.

“I was so scared that I urinated on myself and told them that he (Adefolarin) was not back from Canada,” she said adding that after several threats, they left with a promise to always come back to the house until they got Adefolarin.

“I was slapped four times and my daughter was slapped twice; they threatened to kill us one by one if we don’t tell them my son’s whereabouts.

“After pleading with them for about one hour, they decided to leave,” she explained.

One other family member, Kazeem Alani Sarumi, explained that he was just returning from Tin-can Island Port, Apapa when the gunmen first stormed their house on 23 March.

“As I approached the main entrance, I saw a yellow-colour Mazda Taxi cab with Lagos state plate number parked directly in front of our gate. Immediately, I suspected it could be the men that always came to the house to look for my brother Prince Adefolarin Sarumi.

He said he was able to hide somewhere and took photographs of the car with the plate number.

He added that he scaled the fence and was able to view from hiding the way the gunmen treated his mother and the other victims.

“I heard some noise at the front of the house shortly after they left my family in the living room, so I walked quietly through the side walk of the building to watch them again and saw them leaving in the Mazda cab. On getting to the front, I saw that they had broken the windscreens of two cars belonging Adefolarin. They also broke one of the windows of the house.

He appealed to concerned authorities to come to their aid, expressing disappointment in the police as he said despite several complaints that they had made, officers of the law enforcement agency have refused to act.