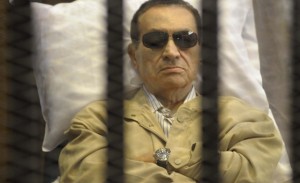 An Egyptian court has ordered the release of former President of Egypt Hosni Mubarak over the deaths of protesters during the Egyptian revolution of 2011, but he will remain in custody over fraud charges, according to court officials.

A judge on Monday ordered Mubarak’s release on bail for charges over his complicity in the killing of protesters but this decision did not cancel his detention due to ongoing separate charges, the officials said.

Mubarak, 84, has spent the maximum legal time of two years in detention since being charged with Habib al-Adli, former interior minister, for their involvement in the killing of protesters in the 2011 uprising that unseated him.

Mubarak’s case is facing an indefinite delay after a retrial was aborted on Saturday when the presiding judge withdrew from the case. Judge Mustafa Abdullah had announced at the opening of the retrial that he was withdrawing from the case for “feeling uneasiness” and asked the Appeals Court to pick a replacement to hear the case.

Mubarak and Adli were sentenced to life terms at their first trial in June but the highest appeal court ordered a retrial after accepting appeals from the defence and prosecution.

Mubarak, who ruled Egypt for almost 30 years before being toppled by 18 days of unrest, is also facing an investigation over financial corruption charges, Egyptian media has reported.

He has been staying in a military hospital from where he was flown by helicopter to the court on Saturday.

Public Prosecutor Talaat Abdullah, controversially appointed by the Islamist President Mohammad Mursi, ordered the formation of a medical committee to decide if Mubarak’s health is good enough to allow his return to the prison. The move is designed to allay the anger Mubarak’s court appearance has sparked from both Islamists and revolutionaries.

More than 800 people were killed and 6,000 injured in the anti-Mubarak uprising. “Now that Mubarak is about to walk free and more protesters continue to be killed by the Mursi regime, I won’t be surprised if demonstrators are accused of overthrowing Mubarak’s government,” quipped Hassan Salah, a political activist.

“Despite his repeated pledges to achieve justice for the demonstrators killed in the revolution against Mubarak, Mursi himself has followed in Mubarak’s footsteps,” Salah told Gulf News.

Mursi, who took office in June, is accused by the secular-minded opposition of failing to fulfil the objectives of the revolt and of acting at the command of his Muslim Brotherhood group.