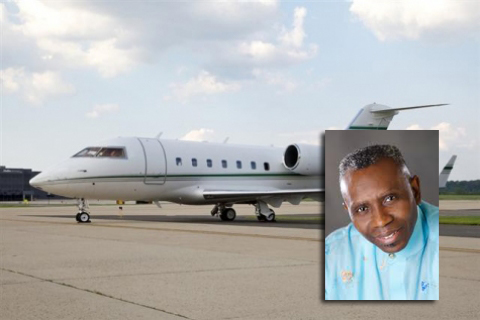 Nigeria’s political scene has recently, witnessed a flurry of accusations and counter-accusations between opposition parties and the Presidency as well as the ruling party – Peoples’ Democratic Party (PDP) with the latest accusation coming from the Congress for Progressive Change (CPC) which has alleged that the bombardier jet being used by National President of Christian Association of Nigerian (CAN), Pastor Ayo Oritsejafor, was purchased by the Presidency.

CPC’s national publicity secretary, Engr Rotimi Fashakin, in a statement yesterday said the offer was a reward for the pastor’s tough stance against the party’s presidential candidate, Gen. Muhammadu Buhari following the post-election violence of 2011.

The press release which was titled ‘Jonathan Regime and the Politicisation of Nigeria’s Security,’ accused the Presidency of buying the jet which was later said to have been bought by members of Oritsejafor’s Word of Life Bible Church congregation in Warri, Delta State.

“The post-election violence in April 2011 that disrupted the peace in some parts of Northern Nigeria was seen as a spontaneous reaction of the people to the subversion of their electoral rights. Pastor Ayodele Oritsejafor, the President of Christian Association of Nigeria (CAN) and President Jonathan’s side-kick, called a press conference and bizarrely demanded the arrest of General Muhammadu Buhari.

“It did not matter that the fashionable cleric did not possess verifiable evidence to support his claim. This was seen as President Jonathan’s attempt at polarising the polity along religious lines in an iniquitous divide-and-rule scheme.

“As a fitting reward for that execrable service and many others, Pastor Oritsejafor was rewarded on November 10, 2012 with the gift of a Bombardier private jet at a ceremony in which the President was physically present! We were later told the cleric’s congregation made the donation”, he said.