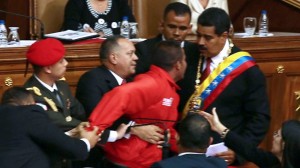 Venezuela’s new President Nicolas Maduro was roughly pushed aside by a youth in a red shirt who ran on stage during his inaugural address.

The young man jumped on stage at the National Assembly and grabbed the microphone from Maduro.

Maduro defeated his centrist rival Henrique Capriles by an embarrassingly tight margin of 50.7% to 49.1%, just as his predecessor, Hugo Chavez, who handpicked him as successor before he died pipped Capriles by just 11 points.

With Chávez’s blustering figure gone, Venezuelans now recognize the raft of economic and social messes he left behind.

According to TIME, the social messes which are now obvious makes the political landscape ahead in Venezuela, which holds the world’s largest oil reserves, volatile if not potentially violent.

Maduro, who to his credit said he’d accept the full vote recount Capriles is demanding, called his win “a fair, legal and constitutional triumph,” and it probably was, despite opposition concerns about the Chavista-packed National Election Council, known as CNE. But Capriles argued he’d scored an equally important victory by exposing how vulnerable Chávez’s United Socialist Party (PSUV) is in the absence of the late President’s charismatic bond with its base. “This system,” Capriles declared, “is a sand castle.”

Maduro’s inauguration went ahead however, but the sudden appearance of the young man who suddenly jumped on the National Assembly stage, caused momentary confusion as national television coverage of the event briefly went off the air, returning after Maduro had regained his composure and the youth had been moved off stage.

“Incident overcome,” said Maduro, saying he would speak to the man after the address and then continuing with his speech.

Maduro had earlier been sworn in as president of Venezuela, taking the oath of office in the memory of the late Hugo Chavez to cheers in the National Assembly.

“I swear it before the eternal memory of the supreme commander,” he said after being read the oath by National Assembly speaker Diosdado Cabello.

Cheers broke out in the packed assembly as the presidential sash was placed over the 50-year-old Maduro, who was elected president on Sunday in snap elections to replace Chavez, who died of cancer in March after 14 years in power.

Close Chavez allies including Presidents Raul Castro of Cuba and Mahmoud Ahmadinejad of Iran watched the ceremony along with leaders from other Latin American countries who rallied around oil-rich Venezuela’s new government.

Fireworks fired by Maduro supporters boomed across the city in celebration but the fainter sound of pots being banged in protest could also be heard, recalling that his narrow victory has been challenged by the opposition.