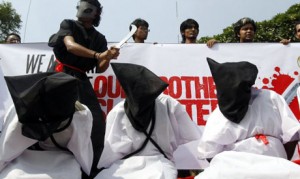 The kingdom of Saudi Arabia on Monday beheaded one of its nationals convicted of murdering a fellow Saudi in the southern Assir region, according to the interior ministry.

The beheading of Al Qah’tani brings to 29 the number of people executed so far this year in Saudi Arabia.

The kingdom executed 76 people in 2012, according to an AFP tally based on official figures. The US-based Human Rights Watch put the number at 69.

In Saudi Arabia, a strict Sharia law is practised where offences like molestation, murder, apostasy, armed robbery and drug trafficking are all punishable by death.