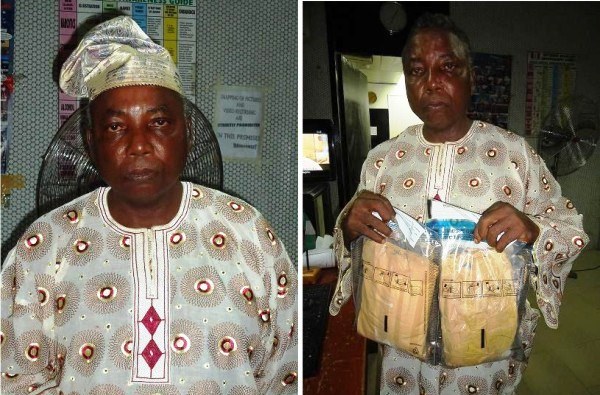 The 62-year-old former guitarist who once worked with jùjú music maestro, King Sunny Ade, pleaded guilty to one count of unlawful exportation of 1.575kg of cocaine during his arraignment on February 26, 2013.

Earlier, his counsel, Mr. Bayo Onifade, pleaded with the court to temper justice with mercy as Abiodun was a husband of three wives with 12 children.

However, Justice S. Seidu, sentenced the convict to three years imprisonment with effect from the date of arrest.

Seidu said, “The appeal of the defence counsel has been taken into consideration and the fact that the convict pleaded guilty as charged without wasting the time of the court was also carefully considered.”

Information Nigeria recalls that Abiodun was nabbed by operatives of the National Drug Law Enforcement Agency on January 1, 2013, at the Murtala Mohammed International Airport, Lagos as he attempted to board an Air France flight to Italy.

During a search, two parcels of cocaine weighing 1.575kg were found hidden in the false bottom of his luggage.

Abiodun had blamed poverty for his predicament saying “…I did it out of frustration because at my age, I could not provide for my family. I am ashamed of myself.”

Chairman of NDLEA, Ahmadu Giade, however, said stiffer penalty should be meted out to drug offenders.

“Punishment must be commensurate with offence to serve as a deterrent to others. The drug is worth millions of naira and the damage to humanity cannot be quantified” he said.